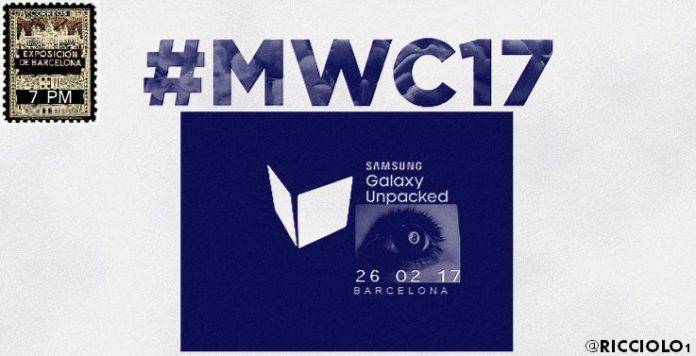 The problems and travails of Samsung is far from over as supposedly more replacements for the Galaxy Note 7 are still catching fire. But while they are still waiting for the outcome of the latest investigation, life apparently goes on. A Twitter user, who had previously accurately predicted the Galaxy S7 launch date, has “revealed” that the upcoming new flagship, the Galaxy S8 will be launching on February 27, 2017, the day before the start of the Mobile World Congress next year.

@Ricciolo1 tweeted out a “leaked picture” showing the invitation to the Samsung Galaxy Unpacked event in 2017 in Barcelona, dated February 27. The MWC starts March 1 and for the past few years, Samsung usually has an event the day before it begins. Some actually expected that the announcement of the Galaxy S8 will happen earlier, given all the ongoing problems with the Galaxy Note 7. But it looks like they’re sticking to their original plan.

As for the rumored specs of the upcoming new flagship, one of the more persistent ones is that it will come with a dual-lens camera. This has actually been almost confirmed as new trademark registrations have been spotted, the “LightUp Camera” and”Light+ Camera”, both of which are designed to help you take better pictures in the dark. The Galaxy S8 is also rumored to have either a built-in projector or an iris scanner, with the latter most likely since the Galaxy Note 7 actually has one.

Of course we’ll be hearing a lot more rumors and speculation in the lead-up to February 27, 2017, if that is indeed the date. In the meantime, the Galaxy Note 7 saga is still ongoing and so let’s hope Samsung can actually bounce back from this latest setback.

Despite #Note7 #disaster,(ATM) i have been confirmed ,no early announcement…#GalaxyS8 SEe you 2+6 😉 Feb at 7PM #samsung #BeCareful ! pic.twitter.com/Rsh196dmBk