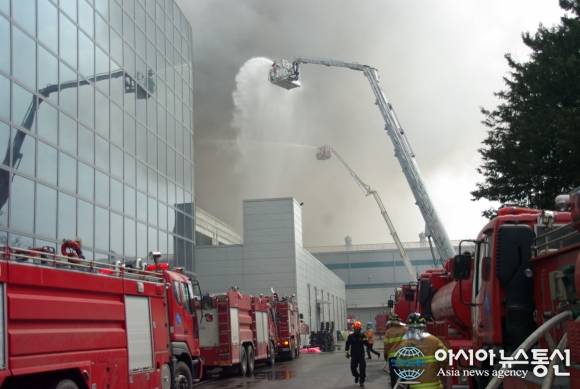 Those eager to get their hands on Samsung‘s latest smartphone might find themselves waiting a bit longer. A large fire at a key South Korean factory is feared to put a dent on the production quantity and schedule of the Galaxy S5.

The fire, which lasted six hours and required 300 firefighters to put out, started around 7 AM. The factory, which is located in Anseong, South Korea, is one of Samsung’s main lines for producing the printed circuit boards or PCBs used in the devices. The fire was believed to have originated from the factory’s third floor but the exact cause is still unknown. Damages are estimated to have reached $1 billion.

It might be a terrible tragedy but it will not completely halt Samsung’s plans. The Korean manufacturer has other factories that produce PCBs that will definitely push through with the Galaxy S5 schedule. Samsung is confident that the incident will not cause a delay in schedule, but it might be a bit too unrealistic to presume that it will have no adverse effects.

Although others have not exactly been impressed by the smartphone, and some even ridiculed is supposedly fashionable back cover, the Galaxy S5 has its share of fans like any other flagship device. T-Mobile claims that as much as 300,000 people have already pre-registered for the smartphone, which Samsung has set for an April 11 launch. While there will most probably be devices already available by then, it remains to be seen if Samsung will be able to produce the needed volume to keep it in stock.