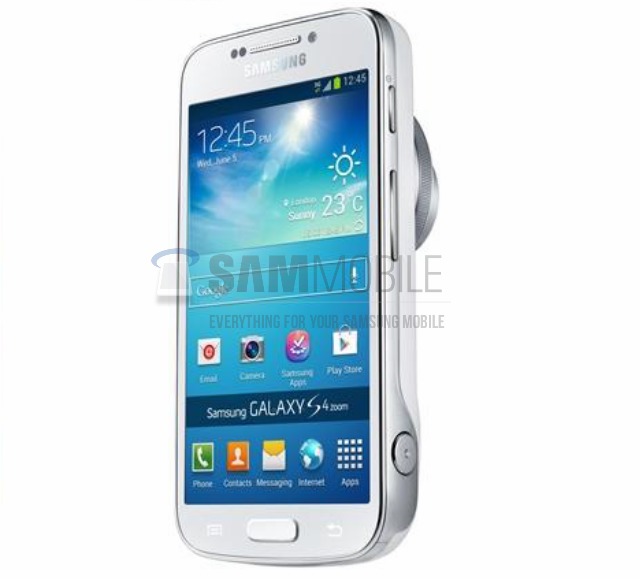 The highly anticipated Samsung Galaxy S4 Zoom is making it into your pocket. That is, if it can fit. The awkward shape of the new phone, revealed in this newly leaked and possibly fake photo may suggest otherwise however. But while its looks may not win everyone over, as they say with true love “It’s what’s inside that counts most”.

SamMobile has the exclusive first photo of the new Camera Phone from Samsung, and although it is certainly astonishing in terms of its shape, it more than makes up for its awkwardness in its specs. With a 4.3″ qHD AMOLED display paired to a 16 megapixel Camera with optical zoom, a 1.6GHz dual-core processor, an internal 8GB memory (externally expandable up to 64GB via Micro SD), an external shutter button, and right sided volume/zoom buttons, it will give your everyday quick cam a run for its money. As previously reported it will also run Bluetooth 4.0 LE WiFi 802.11 a/b/g/n with A-GPS. Oh, and did we mention that it can make calls too?

Most impressive is that the new Zoom will use Samsung’s usual Touch-Wiz Nature UX interface that will utilize Android 4.2.2 Jelly Bean. That means that you’ll not only be able to snap great pictures, but edit them with ease on the go as well. Go crazy you Instagram fans.

Unfortunately, the Zoom will also be Samsung’s last forte into the Galaxy S4 realm, closing up a charge held together with the S4 Mini, and the S4 Active. But for those still yearning for more, the Galaxy Tab 3 series is also set to make a debut on or before June 20th.