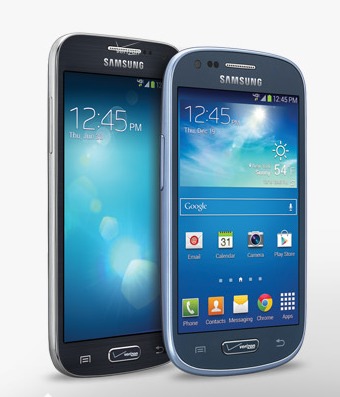 In a rather low-key announcement, Verizon Wireless has announced the immediate availability of a pair of ‘mini’ Samsung devices. The handsets include the Galaxy S4 mini and Galaxy S III mini and they are being touted as offering big features in a compact size. They are both being sold with two-year agreements and they are priced at $99.99 and $49.99 respectively.

Aside from both running Android 4.2.2 Jelly Bean and both having WiFi, Bluetooth, NFC and a microSD card slot — the specs vary from device to device. In the case of the Galaxy S4 mini, this one is powered by a dual-core 1.7GHz processor with 1.5GB of RAM, 16GB of storage, 1900 mAh battery, 1.9 megapixel front-facing camera and 8 megapixel rear-facing camera.

Shifting over to the Galaxy S III mini and we find a handset with a dual-core 1.2GHz processor, 1GB of RAM and 8GB of internal storage. The S III mini also has a 2000 mAh battery, VGA quality front-facing camera and 5 megapixel rear-facing camera.

And as we have recently seen the ISIS Mobile Wallet launch nationwide, both of these handsets are arriving with support. Another similarity, as you will notice from the image sitting above, is the Verizon branding on the home button.