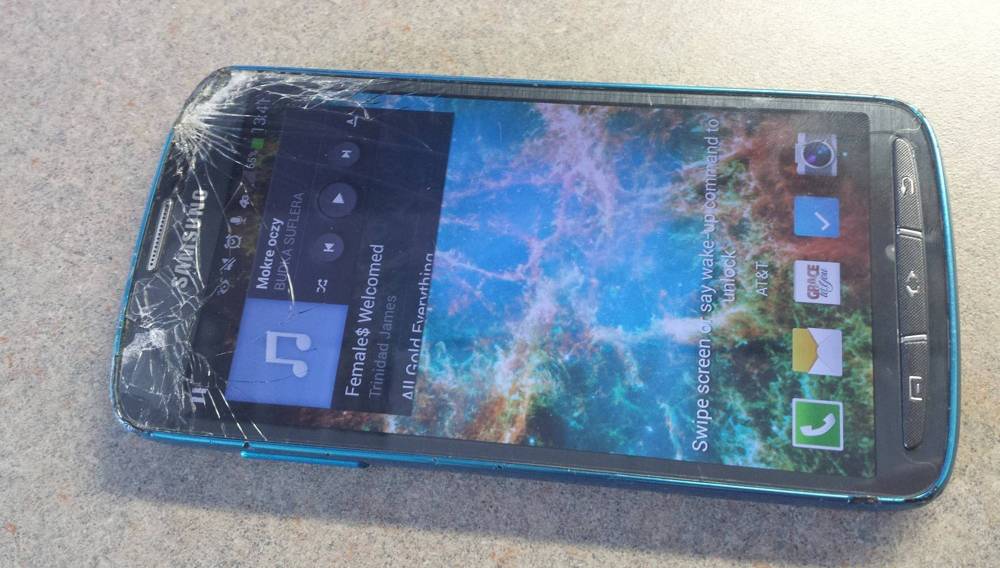 When I think of a phone made for “rugged”, I will most likely point back to my venerable old Nokia 6250, and not to the Galaxy S4 Active which Samsung purports to be a ruggedized version of its 2013 flagship phone. Believe us that when they thought of the moniker “active”, they were not thinking of being “crunched by a lawnmower” kind of active. But this unit, although a bit worse for wear (just a tiny bit), miraculously survived the lawnmower treatment.

These pictures were taken from a Reddit post, where the owner said that he accidentally dropped his Galaxy S4 Active on a lawn that was being mown by a lawnmower – the heavy-duty kind that you ride on. You could just hear the sickening crunch and rattle when you imagine this piece of technology – although designed to be used outdoors, but never this way – went through the blades of the lawnmower.

The images show, though, that the phone – with a few cracks and face-altering damages – actually still powered on. The owner professes that the Galaxy S4 active was operational and that it even played music and retained some of its touchscreen ability. It’s not our place to bust on Samsung, but hey, at least when they said it was more durable than most – this proves that their claims do have some mettle.

Of course, some sort of heavy repairs would have to be done at the very least, to get this phone back to working order – if that even is a sensible thing to do with it. A replacement may be called for here, but you’ve gotta give credit where it is due, right? I mean, how many of your phones today would survive an intimate date with metal lawnmower blades spinning at more than 300kph?