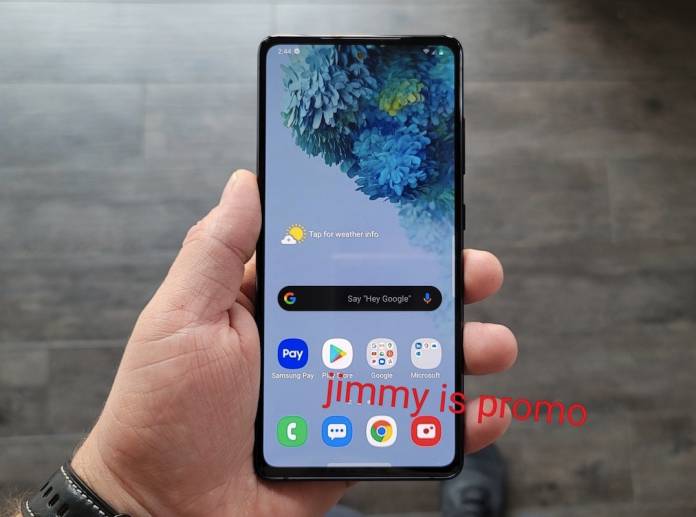 The Samsung Galaxy S20 FE 5G is about to be announced. We’ve been hearing more about this Fan Edition since last month when it was first spotted on Samsung Bulgaria website. Specs and colors were quickly leaked. We learned it may feature 25W charging and is arriving soon. Different colors were already spotted before launch. The phone was also said to arrive in Q4 with a 120Hz refresh rate and Snapdragon 865 processor. It may be introduced soon according to a number of teasers.

The Samsung Galaxy S20 FE 5G is almost ready. Jimmy is Promo (@jimmyispromo) has shared some important information and hands-on photos of the device. The new Galaxy phone is flat. The screen is 6.5-inches with FHD+ resolution and 120Hz refresh rate. It comes with IP68 rating already.

The phone comes with a “nice price” although we’re not sure how much it will be. The camera system comes with 3x optical and 10x digital (30x rear) plus a 32MP selfie camera. Out of the box, the Samsung Galaxy S20 FE runs One UI 2.5 but we can expect it will get One UI 3.0 once ready. The source also said there is no S Pen.

Jimmy’s post is already convincing but another leak proves the Fan Edition is about to be unveiled. Sighted on Verizon is a full set of specs and images. It has everything we know so far. It’s a dev page but the details are no longer viewable.

We’re still expecting the Galaxy S20 FE will arrive in different colors like Red, Green, Lavender, Orange, and Navy Blue. It is expected to come with a triple rear camera system that consists of a 12MP ultra-wide lens plus a 12MP wide-angle shooter and an 8MP telephoto camera with a 30X Super Resolution Zoom action. The enhanced camera AI can be expected, as well as, a 32MP selfie shooter under an Infinity-O punch hole. The launch of the Samsung Galaxy S20 FE (Fan Edition) is said to be on September 23 with a $750 price point.