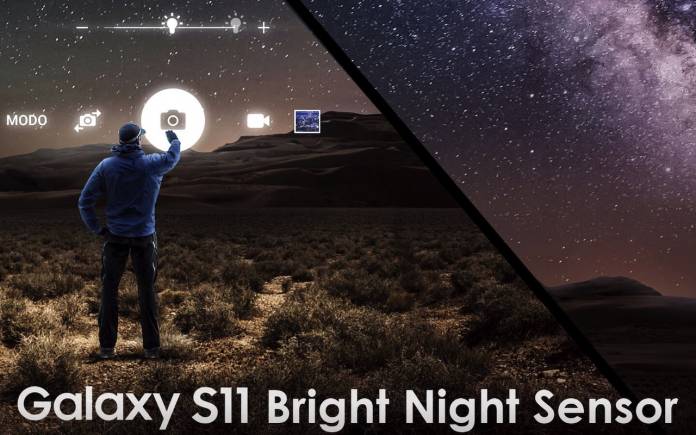 In a few months, Samsung will finally reveal the new Galaxy S11 series. It will come in three variants: the Galaxy S11e, Galaxy S11, and the Galaxy S11+. Much has been said about the upcoming premium flagship phones like the possibility of an expandable screen as shown off in patent images, an advanced camera system with 5x zoom cam, a bigger fingerprint sensor, more color options, built-in spectrometer, a display with 20:9 aspect ratio, plus more powerful features.

The Samsung Galaxy S11 is also believed to arrive in five variants and three sizes. Those variants vary because of the 4G LTE and 5G models. Rumor has it the camera system will boast five shooters, one of which is 108MP. We can also expect a new camera sensor which may improve evening videos and night photography.

The Bright Night Sensor has been sighted on the EUIPO (European Union Intellectual Property Office) where Samsung filed for trademark just last week. It’s on Class 9 which means it can be anything from a smartphone to a wearable phone to a monitor, LED display, etc. Such a new sensor isn’t surprising because the Bright Night Shot has been available on the Galaxy S10 and Galaxy Note 10. Samsung must be making things more official and formal with the trademark.

Samsung’s Bright Night Sensor is said to be ready for both photos and videos. It’s probably what makes the camera system more advanced than ever. The more advanced the phone camera, the less the need for a compact camera or a DSLR.

Cameras on phones still have a lot of rooms for improvement but changes are rapid enough it can be hard for some OEMs to keep up with the development. Samsung is one of the forerunners in camera phones and we can expect the Galaxy S11 to be advanced in many ways.