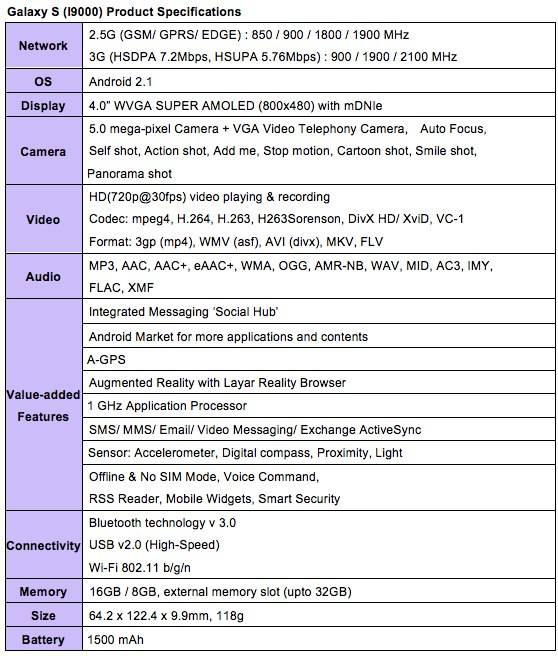 Having heard talk earlier today about the Samsung Galaxy S GT-I9000 and a huge simultaneous roll-out, Samsung themselves have confirmed that the Android 2.1 smartphone has launched in Europe, and will follow on to the rest of the world – US included – later in 2010.  The company also confirms the sizeable carrier pick-up, too; apparently over 100 operators are going to be offering the smartphone.

As for the Galaxy S itself, that has a 4.0-inch Super AMOLED touchscreen, 1 GHz Hummingbird processor, TouchWiz 3.0 user-interface, Swype text input and a 5-megapixel autofocus camera.  There’s also a front-facing camera for video calls, WiFi b/g/n and Bluetooth 3.0.  No word on pricing at this stage.

The Samsung Galaxy S has been extremely well received by retailers and operators around the world; in fact over 100 mobile operators across the globe have selected the Galaxy S as their key smartphone market driver. Available across Europe at launch, the Galaxy S will roll out to the rest of the world including the US later this year.

“The Android-powered Samsung Galaxy S will set a new standard for smartphones, and the excitement we’ve seen from operators and retailers for this device is testament to that,” said JK Shin, president and head of the Mobile Communications Business, Samsung Electronics. “The Samsung Galaxy S is the perfect device for people in all corners of the world who want that extra edge; to be more effective, productive, better connected, and in tune with their smart life – both personal and professional – all in a very easy and simple way. We’re extremely confident that this device is going to be very successful in every market.”

As part of Samsung’s drive to democratize the smartphone market, the Galaxy S will be the flagship model of the smartphone range Samsung will introduce this year. It will also offer enhanced opportunities for developers and new revenue streams for operators. JK Shin continued, “Everyone is going to benefit from this revolutionary new device: from the consumer with the phone in their hand, to application developers and the many global operators who have signed up to support the Galaxy S. This truly is a phone for the whole ecosystem.”

Featuring Samsung’s dazzlingly bright 4-inch Super AMOLED screen and a 1 GHz application processor, the Android™-powered Samsung Galaxy S is designed to provide immersive, intelligent and integrated experiences, with the power to enrich people’s lives through best-in-class services and technologies. It will introduce people to the concept of the “Smart Life” – a smartphone experience that is simple, organize and integrated; one that enriches the lives of users.

More than 50,000 applications from Android MarketÔ and Samsung Apps will allow users to extend the benefits and excitement of the smartphone experience even more. Users have access to GoogleÔ mobile services, such as Google SearchÔ, GmailÔ, and Google MapsÔ.