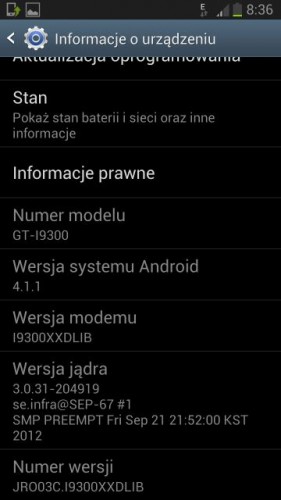 According to reports from users over in Europe, Jelly Bean has begun to roll out to Samsung‘s flagship phone, the Galaxy S III. We’ve heard that Jelly Bean would be coming to the S III in October, so it looks like it’s getting an early head-start with users in Europe. Hopefully the US will be getting the update sooner than expected as well.

European users say that the Jelly Bean update has been showing up via the KIES update app as a tethered update (rather than over-the-air like most updates). The approximate 280 MB update includes all the cool new features we saw back in July at Google’s I/O event, like Project Butter, Google Now, and improved notifications.

Eastern European countries such as Poland, Croatia, Macedonia, and Serbia are receiving the update now, while other European countries will most likely see it a little later. We have a feeling that Samsung will take its time rolling out Jelly Bean to the Galaxy S III in order to protect its servers from overloading and crashing, so you’ll most likely have to be very patient.

While all the new features of Jelly Bean will be present on the S III, Samsung will most likely keep its TouchWiz UI at the forefront, which means we might possibly see some improved user interface changes, but you still won’t be able to experience the true vanilla interface of Jelly Bean on the S III without rooting and flashing a custom ROM.