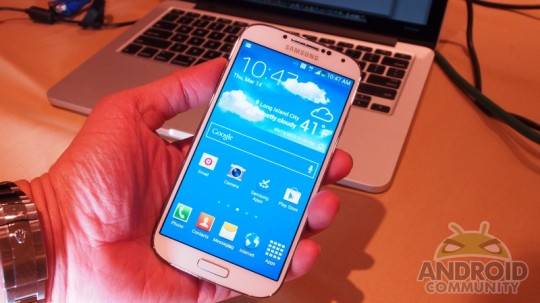 Just as we all expected it looks like Samsung’s new flagship GALAXY S 4 will be widely available shortly across the U.S. with 7 carriers all on board to release the device. When can you get the GALAXY S 4? All 7 carriers are launching between April and the end of May, and it looks like we should start seeing the devices hit the street in a matter of weeks from folks like AT&T and T-Mobile.

We’ve already known most of the details from their event back in NYC, but today Samsung confirmed the 7 carriers on board as well as 7 retailers around the U.S. will also all be offering the new handset as soon as possible. AT&T confirmed their release date recently, and today we learned T-Mobile will offer up the GALAXY S 4 starting April 24th for just $149. Aside from the big 4 carriers we also have US Cellular, Cricket, and C-Spire all on board for a quick release.

So where other than select carrier stores can you walk in and pick up this new smartphone? Lots of places. Samsung has confirmed at least 7 will carry their phone and those are: Best Buy and Best Buy Mobile, Costco, Radio Shack, Sam’s Club, Staples, Target and Wal-Mart. Can’t forget good old Wallyworld. Yes, that’s what I call it.

This afternoon Samsung also announced more details on all their accessories, and you can learn more on those by heading here. For now we don’t have exact dates from everyone but are expecting them all to be announced soon. AT&T is asking $199 for the handset, and most will probably follow suite except for T-Mobile, who confirmed today it will be just $149 off contract with monthly payments. Stay tuned for further details.