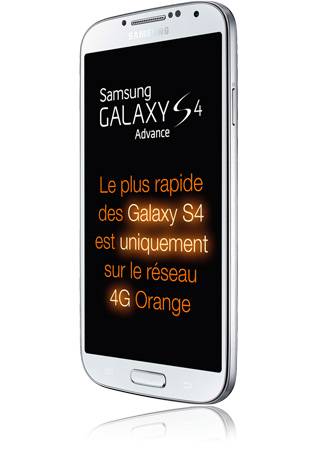 The Snapdragon 800 touting variant of Samsung‘s flagship has arrived on French soil and has even picked up a new name. The Galaxy S 4 Advance does try to live up to its name and offers a few features that rank it just slightly higher than its original and older namesake.

The Galaxy S 4 may be Samsung’s nominal flagship, but the device, by now, isn’t as up-to-date anymore, especially the processor, which is a Qualcomm Snapdragon 600. The highest specs have been bestowed on the Galaxy Note III, which sports a more current Snapdragon 800. It seems that Samsung has also seen the imbalanced and has started offering a refreshed Galaxy S 4 in limited markets, particularly in Europe.

Last month, Samsung quietly sneaked in one such model into Germany, simply called the Galaxy S 4 with LTE-A. The company is now doing it again, but this time has come up with a more descriptive and memorable name, the Galaxy S 4 Advance. Compared to the original, it is a bit more advanced, running on a 2.2 GHz quad-core processor and supporting the relatively new LTE Advanced or LTE-A technology, which has a theoretical download speed of up to 150 Mbps. Other than that, though, there isn’t much of a difference between the two Galaxy S 4 variants.