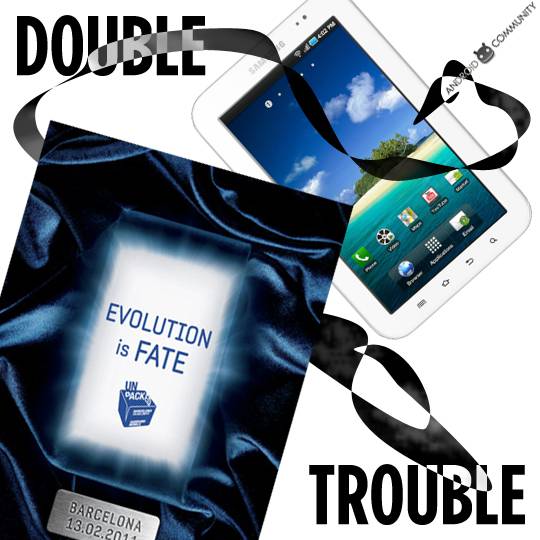 So you saw the fight we had going on between the XPERIA Play (aka the PlayStation phone) and the Sony NGP (aka the PSP 2) earlier today, did you? Well check it out, we’ve got another unlikely pairing going on for you, this time in a whole other solar system! This post contains nothing less than a knockout fight between the Samsung Galaxy S 2 and the Samsung Galaxy Tab 2. Why would we face these brothers or sisters-in-arms against eachother in a deathmatch? Because we’re cruel? Because we hate family togetherness? No way! It’s because not only are they both still in their unreleased/leaked stages of their lives, they’re both surprisingly similar! So strap on your wrestling boots and get your spaceship on!

Now before we get this fight on, before we take the gloves off and put the grease on the wheels, we’ve got to tell you that these specs are based almost exclusively on rumor and speculation. As far as we know, they could be very real, or they could be very fake. All we know is that these numbers have been reported in one way or another, and we’re just tearing our eyelids off with anticipation to see them both actually released. Thusly, we fight!

Samsung Galaxy Tab 2
Weighing in at a lofty Android 3.0 Honeycomb, with a 7″ 2048×1200 pixel Super AMOLED Plus Display covered entirely with Gorilla Glass, this bad mother will be entirely 3D capable. This device thunders in with a 1 Ghz NVIDIA Tegra 2 Dual-Core CPU and has 1 GB RAM with 64 GB Storage. Connections in and out of the Galaxy Tab 2 include HSPA on bands unkown, WiFi b/g/n, DLNA, USB 2.0, and Bluetooth 3.0. For visuals, this monster boasts a 8 megapixel camera on the back with a Dual LED flash and 1080p video recording, while on its front its got a 3 megapixel camera for video chat.

Samsung Galaxy S 2
Weighing in at approximately Android 2.3 Gingerbread, with a 4.3″ 800×480 pixel Super AMOLED Plus Display covered entirely with Gorilla Glass, this device boasts a lovely 1 GHz Samsung Orion Dual-Core CPU and 1 GB of RAM with 16 GB of storage. Connections on this hardcore contender are of course HSPA+ at 14 Mbps / 5.76 Mbps, 900/1900/2100MHz, and WiFi b/g/n with DLNA and Bluetooth 3.0. Finally, for the visuals, the Galaxy S 2 has an 8 megapixel camera on the back with a flash and 1080p video recording, with a 1.3 megapixel camera on the front for video chat. Plus, NFC support!

Who is it gonna be, ladies and gentlemen? If you could only have one device, and your choices were between the two of these devices – what would you do? Take a peek at this gallery of possible images of both devices and see which way they rub you —

ALSO take note that BOTH of these devices will more than likely be being released at Mobile World Congress 2011 in Barcelona in a couple short weeks – we’ll be there LIVE to cover the events as they unfold and we’ll tell you who the REAL winner is – BELIEVE IT!