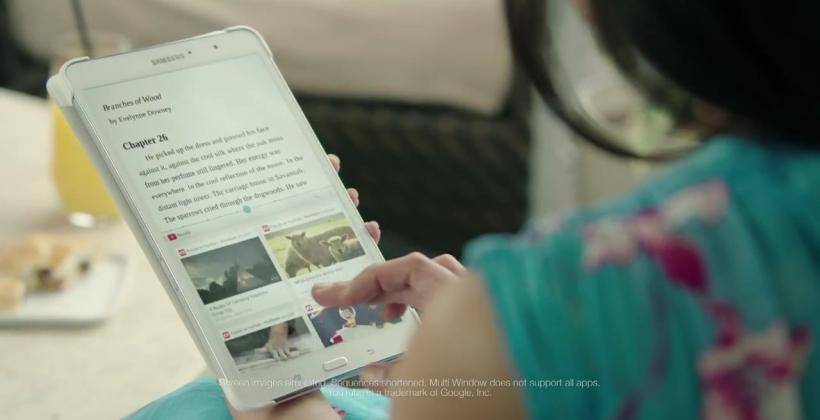 Samsung has fired another volley of not-so-subtle criticisms against its rivals and this time it is not leaving anyone out. It’s latest ad for its Galaxy Pro line of tablets try to make sure that everyone knows that Samsung’s offering makes you more productive than any iPad or Surface or Kindle Fire will ever do.

Of course, this isn’t the first time Samsung has released a video belittling the competition. The last one it did was aimed specifically at comparing itself with Apple, it’s biggest and most dangerous rival. This time, however, it has made sure to also include Microsoft into the mix as it pits its “prosumer” line against the Surface.

The first segment dives into the most obvious advantage of Samsung’s latest high-end devices, which takes multitasking beyond what Android itself provides. Of course, Apple’s iOS has had some amount of multi-tasking capabilities for some time now, but Samsung’s Multi Window is just on a league of its own. Next the Korean manufacturer made sure to call the Surface for what it says it is: a laptop masquerading as a tablet. Although there is some painful truth to that, it might somewhat be a case of a pot calling the kettle black since the Galaxy Pro tablets, especially the Note Pro 12.2, also come with a keyboard and mouse for the sake of productivity. One might even argue that Microsoft’s version is a tad better since the keyobard can double as a cover and doesn’t have to be carried separately. Lastly, Samsung even drags Amazon’s Kindle Fire into the arena, but this is where things get a little sketchy. Of course, the Kindle Fire doesn’t have direct access to Google’s apps, which includes YouTube, but it is hardly true that Amazon‘s tablet can only do books. Unless Samsung was taking shots against the plain Kindle ebook reader, in which case it’s like comparing apples to oranges.

It takes a certain amount of talent to pull of ads like these that are tastefully done, entertaining, and true. While its previous video was more on the mark, this latest seemed to want to hit as many targets as possible and might have ended up missing some. Click on the video above to see for yourself whether Samsung hit the nail on the head or hit its own thumb instead.