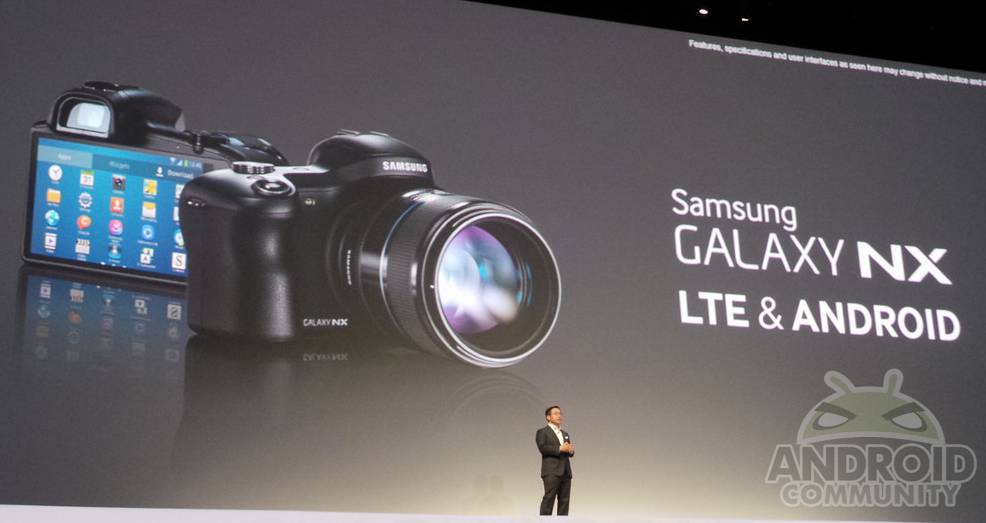 Today, Samsung has officially announced a brand new camera and the next generation of Android devices at their Premiere Event here in London. And that is their new Samsung Galaxy NX Camera. The first 4G LTE connected Compact System Camera complete with interchangeable lens options. Rocking Android 4.2.2 Jelly Bean and a 20.3 megapixel shooter, read on for more details.

The Samsung Galaxy NX Camera leaked in full last week, so now all we’re getting is the actual confirmation from Samsung, and any details that were missed. Live on stage they’ve just announced this impressive camera, and here’s what we know. The Galaxy NX camera takes everything we loved about the Galaxy Camera from last year, and takes it up a notch, or three.

Delivering an improved sensor, interchangeable lens options, and cutting edge optics all being able to use 3G/4G LTE, as well as the suite of over 700,000 Android applications. What we’ve got here is a camera that’s as massive as your everyday interchangeable-lens DSLR, complete with an actual viewfinder and all. This is Samsung’s way of bringing that true photographer-level camera work to Android. Will it be a viable option for professionals? That we’ll have to wait and see. With an advanced hybrid Auto-focus feature, and a fast 1/6000 sec shutter speed and 8.6fps shooting for video. 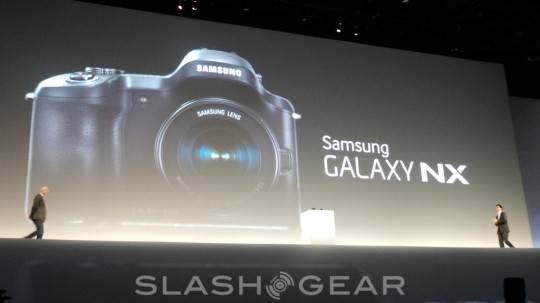 Samsung is making it very clear this is for taking “professional photos” and sharing them with ease thanks to the Android OS and 4G LTE connectivity. Oh and it will also sport WiFi for those who aren’t interested in another plan from Verizon or AT&T, or whoever ends up carrying the device.

The announcements up on stage are coming in tiny spurts, at random, and there’s no sort of organization whatsoever here. They’re a mess is what I’m saying! So we’ll be waiting a bit longer before we learn more details, price, carrier plans, or even the resolution of that 4.8-inch display on back. Rumors have it coming in July, so stay tuned!