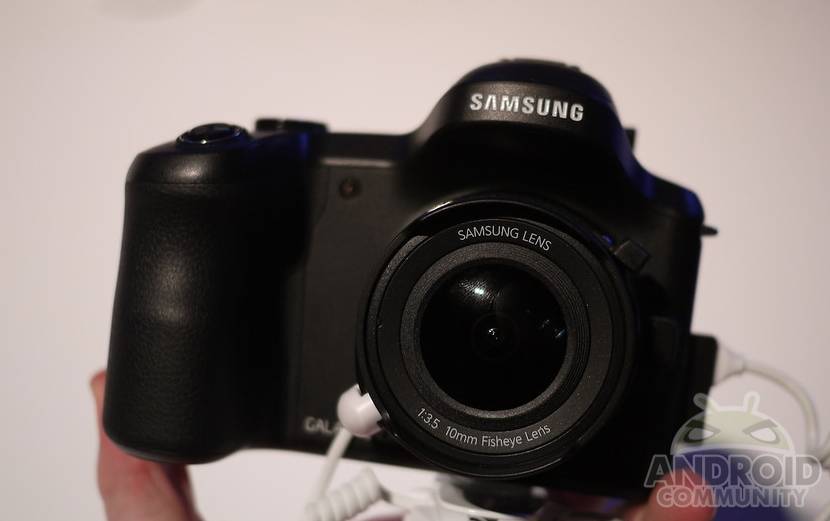 As the most powerful camera yet graced with Android to have been revealed to the public thus far, the Samsung Galaxy NX is bound to be under a bit of scrutiny before it’s accepted as a top-notch shooter. What we’ve got here is a camera that’s as massive as your everyday interchangeable-lens DSLR, but with the ability to connect to the web and take advantage of the full Google Play collection of Android apps. Thanks to WiFi and 4G LTE, it does it all. It’s part of the next generation of Android devices, if you’d be so bold as to say so.

While the Samsung Galaxy Camera (the first) worked with the display on its back as the only way to see through its lens, this device incorporates a physical viewfinder as well. You’ve got a user interface atop Android that’s not all that unlike what we’re seeing with the Galaxy S4 Zoom, both of them reminiscent of the ever-so-slightly unique original Samsung Galaxy Camera. This includes horizontally situated apps and a camera interface optimized for this camera specifically.

All the details can be found here, but we’ll mention them again. We have a full-size DSLR-like camera with a 20.3 MP hybrid autofocus setup, it’s mirrorless, and you can swap out the lens. 18-55mm, 55-200mm, and more. The device works with Android 4.2.2 Jelly Bean on a 4.8-inch 720p display, and has a suite of camera apps dedicated to make your photography experience top notch. It’s powered by a quad-core processor, 2GB of RAM, has 16GB of internal storage and a micro-SD slot. My biggest (and only) complaint about the original was battery life, and Samsung fixed that. The Galaxy NX Camera has a huge 4,360 mAh battery. And it’ll need it for zooming with those lenses. 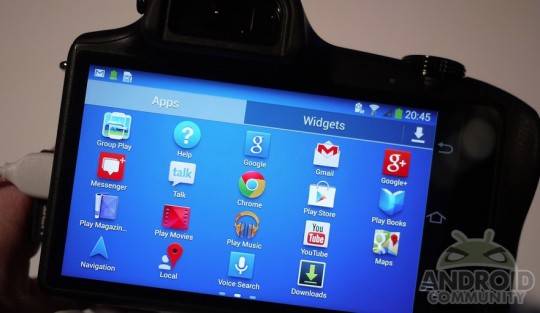 This device is able to make use of a variety of lenses, including both those able to work with manual zoom as well as those working with automatic focus. The sensor on this camera is well-and-away the most powerful ever attached to an Android operating system directly, and the whole camera is presented here by Samsung to be a real-deal full-fledged member of the NX camera family. So how about the important specs? For you camera aficionados: With an advanced hybrid Auto-focus feature, and a fast 1/6000 sec shutter speed and 8.6fps shooting mode it should be plenty fast.

With pop-up flash up top, palm-friendly grip on the right, and rubbery bumper around the viewfinder around the back, this machine is set to be the first real usher of Android into the high-end camera universe. We’ll have to see if the professionals grace it with arms wide open though. (Creed song reference) 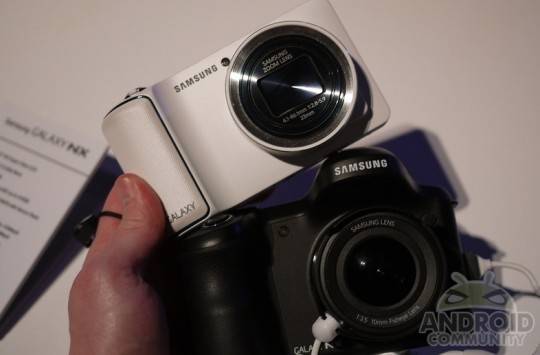 While we’re still debating if it’ll be worth switching from the non-Android shooter we’ve taken the photos you’re seeing above and below with, one thing is clear: this is a rather enticing proposition for lovers of Google’s mobile OS. Have a peek above and below and see what Samsung has in store for this, another unique entry in this week’s barrage of new devices. More hands-on and video is coming up quick.

Give us more details, release date, and a price please Samsung. Rumors have it for a late July release so we’ll be waiting to hear more.

— This hands-on was contributed to by Cory Gunther