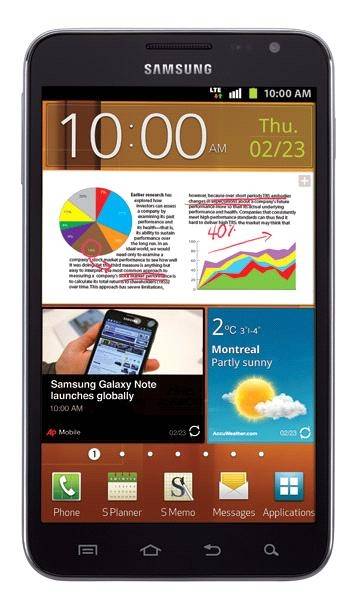 The Samsung Galaxy Note has been in the news plenty as of late, and we’ll be seeing more soon with AT&T and now Rogers both getting a 4G LTE version coming next month. While we got our first look at the LTE model back at CES, Rogers official blog RedBoard has just outed they’ll be getting the 5.3″ phone/tablet hybrid too.

As I’m sure you all know, the Galaxy Note rocks a 5.3″ 1280 x 800 resolution AMOLED HD display and now comes complete with a 1.5 GHz dual-core processor and 1GB of RAM. Not to mention the 8 megapixel camera on the rear and the huge 2,500 mAh battery. The international version launched with Samsung’s own 1.4 GHz dual-core but the recent North American version on the AT&T Note and now Rogers both appear to be using a different 1.5 GHz chip — most likely a Qualcomm.

According to the official post at RedBoard Rogers will be getting the Note LTE in February just like AT&T here in the US, although no exact date or time frame was given. Just like Samsung and AT&T, it is nice to see Rogers using our very own picture from Android Community in their on-device news widget (in the picture above). Expect this 5.3″ device and that awesome WACOM-powered S-pen stylus to hit early February up in Canada on more than a few carriers as we’ve also seen reports that TELUS should receive the device around the same time-frame. Stay tuned for more details.