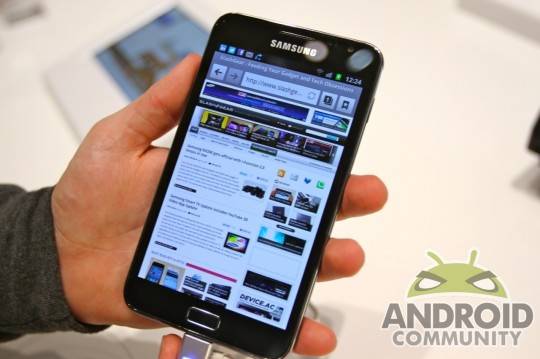 Last week at CES Samsung pulled the wraps off of their 5.3″ Galaxy Note and informed the world it was headed to AT&T. After the initial announcement we saw many comments regarding whether or not this phone-tablet hybrid smartphone would hit other carriers in the US. While nothing has been confirmed yet we are now hearing reports that it will land on Verizon, and maybe even follow the Galaxy Nexus over on the Now Network and their new 4G LTE rolling out this year.

With no announcement from Samsung or any other carriers other than AT&T we don’t have any clear details as to if we’ll see this device land elsewhere. We have however seen a few similar models appear in some Bluetooth and WiFi certification documents suggesting more models are incoming to the states. Today the Examiner is reporting a highly trusted industry analyst has confirmed that Verizon will definetaly be getting the Note — possible called the Samsung Galaxy Journal.

According to these statements the 3 major carriers that are, or will be offering 4G LTE in the USA this year will all get a variant of the 5.3″ Super AMOLED HD packing Galaxy Note device. So basically everyone but T-Mobile according to this analyst, but anything is possible. Not only is the device incoming, but it should be here within the first half of the year.

The name “Galaxy Journal” actually makes a lot of sense — I like it.

— Thanks JaJa and everyone who sent this in!