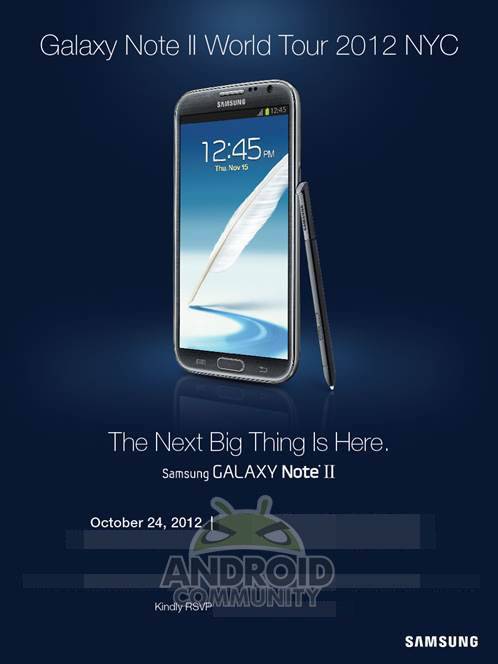 We’ve already heard plenty about the Samsung Galaxy Note II‘s features, and our friends over at SlashGear have given it a full review telling us what they think (spoiler: they’re quite fond of it), but it appears that Samsung has a few more details up its sleeve. The company will be holding a press event in New York City on October 24 for the Galaxy Note II, which is an event we’ve known about for a little while. However, today we’re receiving the formal invitation to the event, and you can see it in all of its glory below.

We’re not expecting any new details about the device itself at this event, but rather some information about the Galaxy Note II’s US launch. Rest assured, very few things – if any – will be changing as the Galaxy Note II makes its way to the US. We’ll still get that massive 5.5-inch screen and the redesigned S Pen, along with all of the nifty functionality the Galaxy Note II can boast.

That includes plenty of multitasking features, along with things like handwriting recognition, S voice, multi view, and Android 4.1 Jelly Bean. We have to say, it’s especially nice seeing the Note II running Jelly Bean out of the box, so if you want a device that’s up to date as far as the Android OS is concerned, the Galaxy Note II is an excellent option. The only downside for some people will be the larger-than-normal size of the device, but for others, that will be a big bonus.

After all, the Note II’s 5.5-inch screen looks great running at 1280×720 resolution, and its increased size allows for more functionality over other, smaller devices. Samsung‘s event is just two short weeks away, and you can bet we’ll have all of the information you need to know straight from the show. Keep it tuned to Android Community folks, because even if we aren’t finding out many new details about the Note II, it’ll still be an event you don’t want to miss!