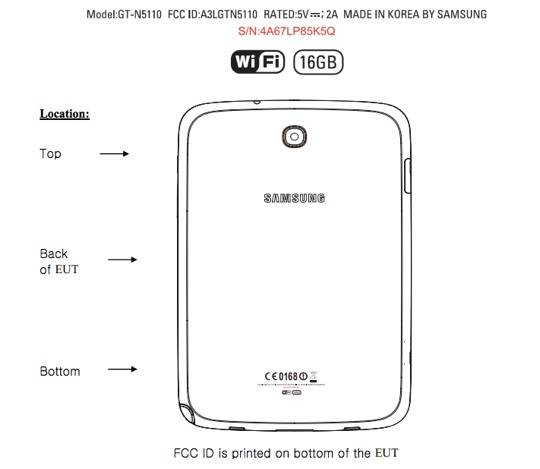 Following up a series of leaked images, it looks as if the Galaxy Note 8.0 has made the required stop with the FCC. The filing shows a tablet sporting the model number of GT-5110, a number we previously saw associated with the 8-inch Note. The GT-5110 number also matches up with details that we have previously been told. For example, the GT-5110 was expected to arrive as the Wi-Fi only model and this FCC filing does indeed show a lack of cellular connectivity.

Based on that it would appear as if we still have another FCC filing to keep an eye out for. This next would be the GT-5100, which is said to be the cellular model. Time will tell just how accurate that plays out to be, however given the other Galaxy Note 8.0 rumors appear to be lining up nicely, we suspect this one will also fall in line. This also seems to be lining up nicely with the expected announcement date, which as we have heard, will happen at Mobile World Congress towards the end of February.

Other details from this FCC filing include the GT-N5110 as being a “personal tablet” that has Bluetooth and Wi-Fi connectivity as well as a 1.6GHz processor — all details we have already seen. Additionally, while it is hard to make a direct comparison between the leaked images that we have seen and the FCC diagram — the placement of certain items seem to line up. For example, the camera is on centered (left to right) on the top of the back and the S Pen slot is tucked away on the bottom corner.

While the images and specs all seem to be lining up nicely, we have one interesting question that seems to remain. This question comes from on the images that we have been seeing. Or more specifically, based on the phone app icon. It would be interesting to see if Samsung chooses to release the Galaxy Note 8.0 in a manner similar to that of the Galaxy Note II. In other words, further blending the lines between needing a tablet and a smartphone. So how about it, anyone ready to give up their smartphone in favor of carrying an 8-inch tablet that can make phone calls?