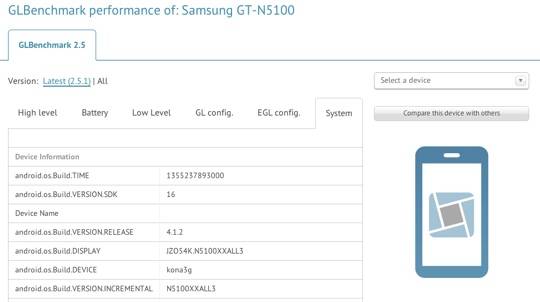 We have seen previous rumors about a 7-inch Galaxy Note coming from Samsung. In fact, earlier this month we saw some NenaMark 2 results for the GT-N5100, the device believed to be the Note 7. And well, flashing back to the present day and it looks like we now have another set of benchmarks for the GT-N5100.

This latest round comes by way of GLBenchmark and while it has not revealed a bunch of new information, it is confirming those previous details. For example, this GLBenchmark filing is also showing a device with a 7.7-inch display at 1280 x 800 and begin powered by a quad-core 1.6GHz processor. The processor is believed to be an Exynos.

Other goodies include the device running Android 4.1.2 Jelly Bean. And from the previous filing, we also know that the tablet will have ARM Mali 400 graphics. Of course, assuming this is indeed Note branded, we would also expected it to also have the S Pen.

All said and done, there is obviously still lots to learn. We need something official from Samsung, which at this point — even an official confirmation would be nice. In terms of an announcement, there is always CES and Mobile World Congress coming up, however we suspect Samsung may end up announcing the Note 7 at an event of their own.