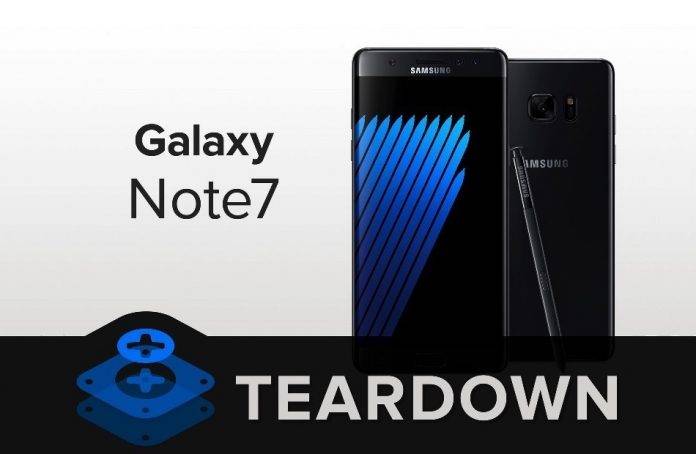 Expect any premium flagship smartphone to be surveyed and pried open by the IFixit guys. Every teardown they do, we learn a thing or two (or more) about the device that most of the time, OEMs don’t tell us. As with durability and stress tests, the point of such teardown is to determine how easy or difficult it is to repair the phone and know how the components are placed inside. The new Samsung Galaxy Note 7 is the latest subject of the experts and from this we learned that the phone is not that easy to repair with only a score of 4 out of 10. That’s low but not surprising since the Galaxy S7 edge got a 3.

The Note 7 is definitely related to the S7 edge and S7. The experts once again used the iOpener to pry it open. Once opened, you’d immediately notice a wireless charging coil and the NFC antenna. These components are held by a few screws only so they are easy to remove.

Removing the battery should be easy but in this case, it was firmly secured in place so extra prying was done. There’s the motherboard taken out together with the three cameras—the 5MP selfie cam, iris scanner, and the Sony IMX260 rear camera.

What makes the Note 7 a challenge to open and repair is the fact that a curved screen is used. It’s difficult to remove and replace the glass without damaging the display. The glass panels are said to be more crackable than ever now.

Inside you will see the good engineering Samsung did to ensure the phone is water-resistant. The IP68 certification shows the S Pen chamber, speaker grille, and headphone jack were well-sealed, thanks to a huge amount of glue. Some components are sealed which makes sense because the Note 7 is expected to be waterproof.

The Samsung Galaxy Note 7 may be a challenge to repair but some parts are replaceable. In summary, here are some points the IFixit guys raised about the repairability of the Galaxy Note 7 from Samsung: