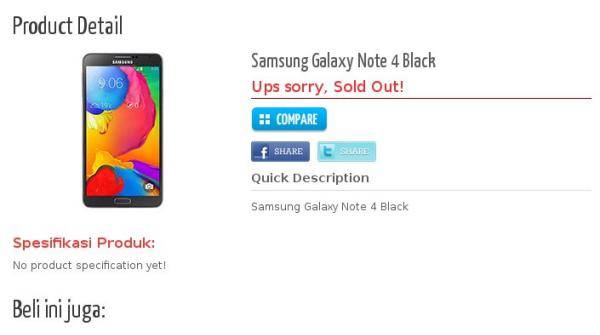 We’re just whittling down the days to IFA 2014 where Samsung will be baring it all about its latest products, particularly the Galaxy Note 4. And Indonesian online retailer, however, practically spilled all the beans about the phablet, revealing juicy hardware specs that is bound to make any smartphone aficionado drool with envy.

First, let’s get to the display. It’s a 5.7-inch screen, same as the current Galaxy Note 3. But while the size didn’t increase, the resolution definitely made a jump, going from 1080p FHD to a 2560×1440 QHD resolution. That gives you a practical pixel density of 515 ppi. Of course, it uses Samsung’s AMOLED tech so, aside from crisper images, blacker blacks and a wider gamut of colors, you can also expect power saving features to be available here, like the much advertised Ultra Power Saving Mode.

Going inside, we are met, unsurprisingly, with two variants of processors, both sporting the highest end CPUs. On the one hand, the SM-910S model will be hosting a 2.5 Ghz quad-core Krait 450 CPU, which is the Qualcomm Snapdragon 805. The other model, the SM-910C, has an octa-core setup with four 1.8 GHz Cortex-A15’s and four 1.3 GHz Cortex-A7’s. This is noted to be the Exynos 5433, most likely a variant of the new Exynos 5430 system-on-chip announced yesterday and used on the Samsung Galaxy Alpha. This chip boasts of a new 20 nm manufacturing process, which translates to an advertised 25 percent reduction in power consumption despite the substantial increase in raw processing power.

The memory is equally, or probably even more, interesting. Storage is at your usual configurations of 16, 32, and 64 GB capacities, with a microSD slot for added memory up to 128 GB. It is the RAM, however, that is more noticeable. The leaked specs put it at 4 GB. the highest so far found in any smartphone. On the one hand, it’s not surprising considering its predecessor was the first to wield 3 GB of RAM. On the other hand, 4 GB marks the upper limit of what is normally accessible by 32-bit CPUs and operating systems. This could very well spark once more discussions and speculation about 64-bit chips. 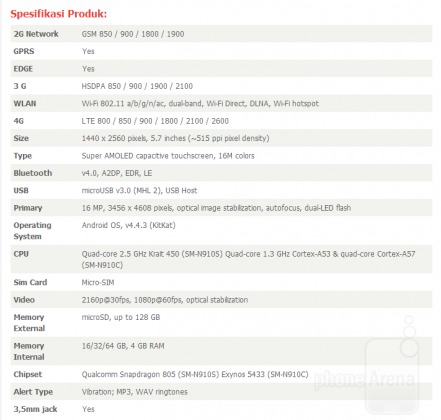 The rest of the specs are nothing to pan either. You have dual-band WiFi with WiFi Direct support, six bands of LTE, MHL 2.0 for video output, USB Host capability, a 16 megapixel rear shooter complete with OIS, and Android 4.4.3, not 4.4.4, out of the box. The price tag for this piece of hardware, at least in Indonesia, was marked at 9,499,000 IDR, converted to around $813. US prices will most likely be quite different, but the raw price is still a bit too steep. We’ll see come September if this spec sheet will match what Samsung has on its side, but this seems to be as close as it gets to the real thing.