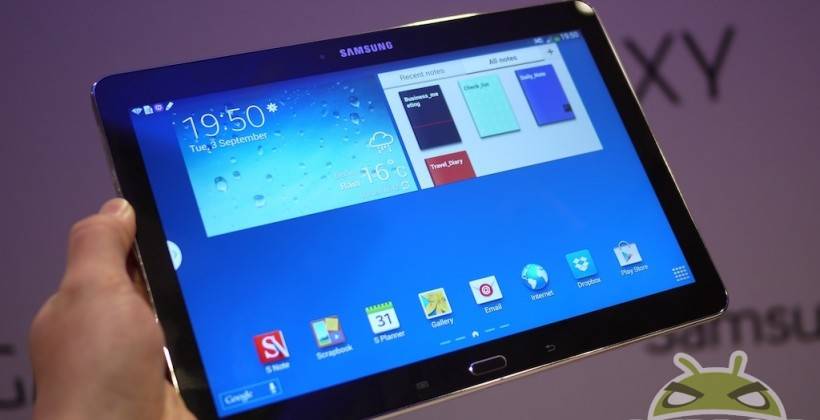 Verizon Wireless has added another tablet to the available lineup. This latest is the Samsung Galaxy Note 10.1 2014 Edition, and similar to other tablets being offered, Verizon is offering the option to grab it with or without an agreement. The tablet is priced at $599.99 on a new two-year agreement, and $699.99 without any agreement.

Naturally, regardless of the price option you choose — you’ll be able to add it to an existing MORE Everything plan for $10 per month. Aside from the addition of Verizon LTE connectivity (and some Verizon branded apps), the Galaxy Note 10.1 2014 Edition feature set includes a display resolution of 2560 x 1600 (at 299 ppi), quad-core 2.3GHz processor, 32GB of internal storage and an 8,220 mAh battery.

The tablet is running Android 4.3, along with plenty of Samsung specifics in terms of apps, features and overall look. In particular, the tablet has the S Pen. It also has the faux-leather back similar to what we first saw with the Galaxy Note 3. Also on the back of the tablet is an 8MP camera with 1080p video recording and the almost expected Verizon and 4G LTE logos.

Those considering a purchase of the Galaxy Note 10.1 may benefit from some of our earlier coverage, which included some hands-on time from shortly after the tablet was originally announced.

Looking away from the Galaxy Note 10.1 2014 Edition and towards the other recent tablet announcements coming from Big Red. Those included the Galaxy Note Pro 12.2 and the LG G Pad 8.3. Those both arrived a bit earlier in the month, and are sitting priced at $749.99 and $199.99 (on two-year agreements) respectively.