We’ve been hearing rumors about the Galaxy S5 Zoom, and a leak from back in March brought details about how the handset could launch with a 19MP camera. More important for today though, it seems we may be getting a first look at the handset.

An image listed as being the Samsung Galaxy K Zoom has recently surfaced. It is believed the K will be replaced by the expected S5 branding. For now we are seeing the backside of the device, which as you can see from the image — is the side with the massive camera lens. 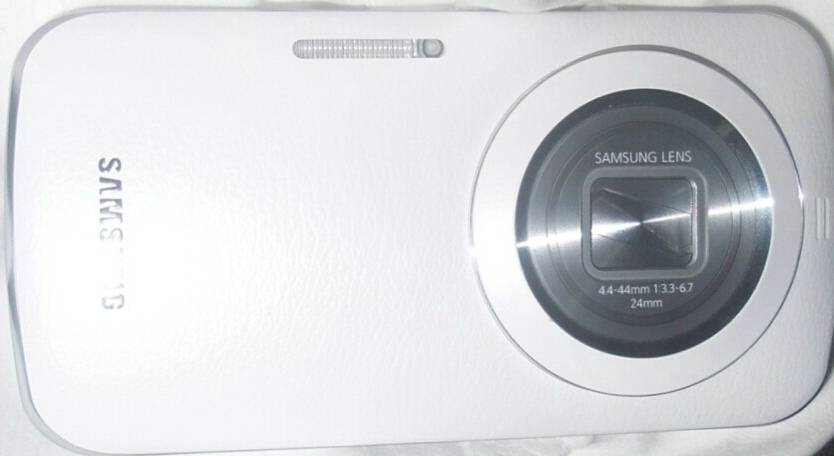 The source of the image noted how the S5 Zoom lens will be “much better hidden in the case.” This of course, comes after what we saw with the Galaxy S4 Zoom, which had a back that looked much more like a regular stand-alone point and shoot camera. Notably missing this time (assuming this image proves accurate) is the bump on the left side, for the hand to hold.

Otherwise, as you’ll notice in the image — there is a flash and what appears to be a faux-leather back. The image also details the lens as follows; 4.4-44mm f3.3-6.7 24mm lens. Aside from this image, we are now hearing the Galaxy S5 Zoom will have a 20MP camera with 10x optical zoom.

Other specs that have been rumored include a 4.8-inch HD display, 2GB of RAM and Android 4.4.2 Kit Kat. There was also mention of how the handset would use either a quad-core 1.6 GHz processor or a 1.3 GHz Samsung Exynos 5 Hexa CPU with ARM Mali-T624 graphics. Time will tell how accurate these rumors and leaks turn out. But for now, we have yet to hear anything official direct from Samsung.