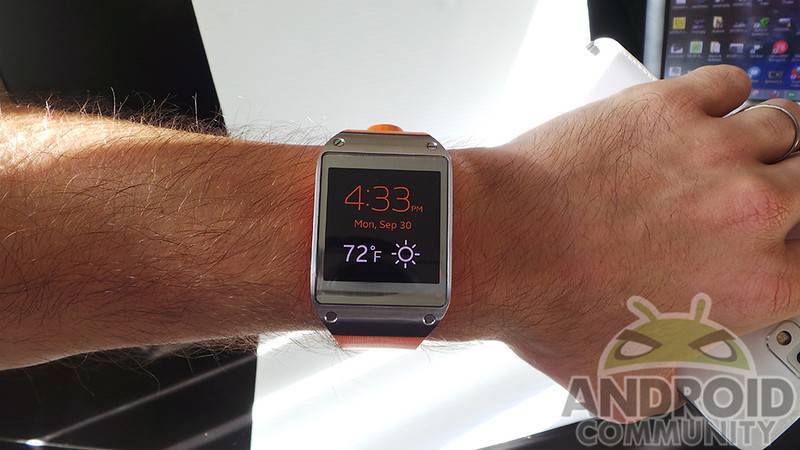 Samsung announced the Galaxy Gear smartwatch at an event in early September. That announcement also included the Galaxy Note 3 and 2014 Edition Galaxy Note 10.1 tablet, however the focus of the moment is the smartwatch. The Galaxy Gear had been available for pre-order with several of the US carriers, however given the $299 price point, we suspect some may have decided to hold back until they were able to read some reviews. So with that in mind, we are taking a look at the reviews that have surfaced around the web, beginning with the one recently posted from our sister site SlashGear.

Smartwatches, while maybe not commonplace just yet, are beginning to gain some attention. The Pebble saw plenty of Kickstarter success and despite them taking quite some time to get units out, the watch received favorable reviews. We have also seen some others such as the Omate TrueSmart, which as the name would imply — offers a bit more. The TrueSmart is more of a smartphone on your wrist, while the Pebble and in this case, the Samsung Galaxy Gear are more companion devices. Though, the Galaxy Gear sits somewhere in between the Pebble and Omate in terms of features and hardware.

For example, while the Galaxy Gear may not be like having a full smartphone on your wrist, it does have features to include a camera that captures still images and video as well as a built-in microphone for answering voice calls. Other features of the Galaxy Gear at this time include receiving notifications from your phone and being able to browse your contacts as well as a pedometer, image gallery and being able to control the music playing on your Note 3.

Samsung had promised a dozen available apps at launch and mentioned how there was more than 70 additional apps already in the works. That brings the first point in terms of these Galaxy Gear reviews — limited functionality. Over on SlashGear, Chris Burns mentioned the Galaxy Gear is a “growing platform” noting how “at the moment it certainly has the basics.” It seems a big part of the success will likely come in terms of developer support and future apps. Not to mention, additional device support, at present the Galaxy Gear only pairs with the Galaxy Note 3. A video walkthrough of the Galaxy Gear sits below.

The camera is more on the basic side, coming in at 1.9 megapixel and without any flash. Users will be able to capture 4:3 formatted images or 15-seconds videos in 720p. While we aren’t sure how many users would buy a smartwatch only for the built-in camera, the images and video are decent enough quality for some quick sharing. For some camera samples as well as the full review you should head over to SlashGear.

Taking a look at what others have to say and we are seeing a similar story. Brad Molen from Engadget closed things out by saying “the Galaxy Gear is a solid effort from Samsung, but it needs time to grow and develop.” Vlad Savov from The Verge on the other hand, was a bit more blunt saying “a smartwatch the Galaxy Gear is not” going on to say he expects the “Galaxy Gear will be looked back upon as a rough first draft.”

NBC News didn’t seem to differ all that much. They offered a pro and con list with several of the pro points being in regards to the color selection and how well it tells time. On the con list they dinged the watch for the battery life, bad camera and price. Fox News was also down on the price noting that “at present, tied to the Note 3, with too few apps and too thick for most wrists, it’s hard to say this $300 smartwatch is a smartbuy.”

Again, this all seems to go back to the Galaxy Gear having some potential, but just not being quite ready for primetime just yet. Needless to say, the reviews were not all together bad and in fact, Matthew Miller from ZDNet mentioned how after testing the Galaxy Gear with the Note 3, he “never hesitated in ordering” one.