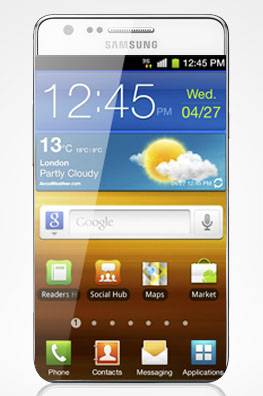 Samsung won’t have the long-awaited Galaxy S III at Mobile World Congress next week, and it appears that none of the hardware it will have on hand is notable enough for a press conference. But if rumors from MK News can be believed, there’ll be at least one interesting thing to see: a smartphone with no bezel, or at least a nearly invisible one. The “Samsung Galaxy B” is reported to have a Super AMOLED display with no bezel (i.e. no space between the edge of the screen and the edge of the phone) on the side or bottom of the screen, with just a sliver on top for a speaker and front-facing camera.

A lack of bezel would make for a stylish-looking phone, certainly – high-end devices have been getting smaller and smaller bezels every year to squeeze larger displays into phones. The Galaxy Nexus and Galaxy S II already have bezels that are downright tiny. That said, having no bezel at all might be a bit of an issue when it comes to usability: too close to the edge ,and gripping the side of your phone could register a press on the capacitive screen. Speaking of capacitive, a phone with zero bezel on the bottom would mean virtual navigation buttons, and following, Ice Cream Sandwich running at launch.

All of this is absolutely, completely and utterly unconfirmed, with no spy photos or specifications to be had. While organic light-emitting diode technology certainly allows for much smaller spaces outside the screen than traditional LCDs, we haven’t seen anyone incorporate an OLED panel into a phone (or any other device) with no bezel at all. Still, that gives us at least one more reason to swing by Samsung’s booth, the first being the unconfirmed Galaxy Tab 11.6. Make sure to keep out Mobile World Congress portal bookmarked for up-to-the-minute coverage from Barcelona, starting on Sunday.