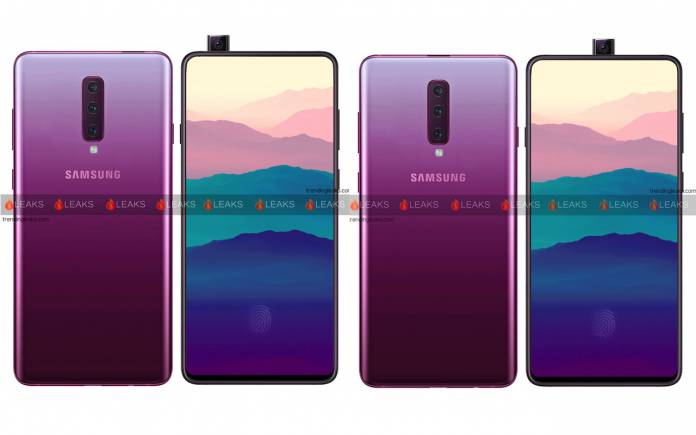 Check out this new Galaxy A smartphone from Samsung. It’s not official yet but the Samsung Galaxy A90 you see here is a concept. The device shows a pop-up camera reminiscent of the Vivo NEX. The idea of pop-up cameras is not new as we learned ASUS filing a patent for a pop-up camera on smartphones last December. The Xiaomi Mi Mix 3 did arrive with one. The OPPO Find X had something similar but it’s more of a sliding mechanism.

The Samsung Galaxy A90 will reportedly have a pop-up camera. The images shared by TrendingLeaks are the same as the one we sighted the other day.

These are exclusive shots of the Samsung Galaxy A90 that look like the real thing. You know these rendered and concept images, more often than not, are very close illustrations.

Samsung’s Galaxy A90 smartphone is said to arrive with a real bezel-less display. The rumored 92% screen-to-body ratio is attractive and we know it’s possible with a pop-up camera.

Why a pop-up camera and not just a selfie shooter and a camera hole in the display? We’re thinking Samsung is doing an experiment of what design will be more efficient. The brand must be testing if the pop-up camera will click better than the selfie camera hole.