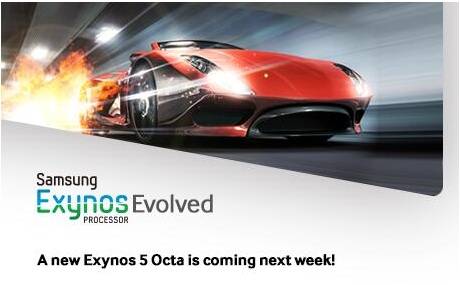 Well look what we have here, Samsung has begun teasing a new version of the Exynos 5 Octa processor. This is the processor currently found in some models of the Galaxy S 4, however it is also expected to be the processor used in the still-unannounced Galaxy Note III. We aren’t expecting Samsung to announce the Note III until September, however this Exynos update is coming next week.

That being said, the details as to what we can expect are on the light side. Samsung took to Twitter using the @SamsungExynos account with talk of this being a “new” Exynos 5 Octa and one that is more powerful and enhanced. They have also said this is the next step in the evolution. Basically, this is just what you would expect from a teaser – enough to leave you wanting more.

Looking back, the original Exynos 5 Octa chips were mentioned in early 2013. There was talk in January during CES and then again in March when Samsung announced production would begin during the second quarter. These chips feature an 8-core processor that will be split between four Cortex A15 cores and Cortex A7 quad cores.

The key with the setup is that only four of these eight cores are active at any given time. Which cores are active depends on the current task. Samsung originally noted the Cortex A15 side would handle tasks to include heavy duty apps such as graphic-rich games and the Cortex A7 side would handle the lighter tasks to include emailing, web searching and mapping.

The current version of the Exynos 5 Octa has the A15 at 1.6GHz and the A7 at 1.2GHz. With a bit of speculation based on the more powerful and enhanced comment from Samsung and it doesn’t seem all that crazy to expect an increase in clock speeds. Of course, the official answer will be arriving next week.