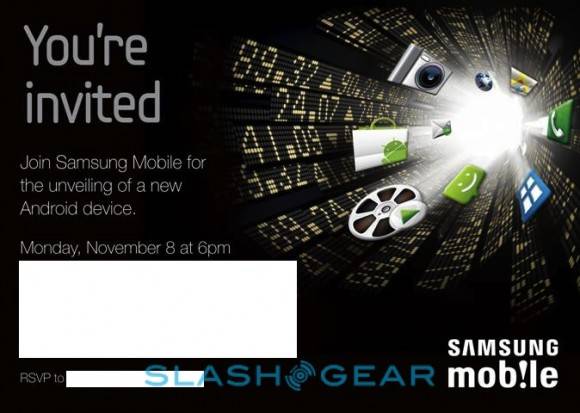 Samsung has just started sending out invitations for an Android event that will be help November 8th in New York City. We’ve been invited to join Samsung Mobile as they unveil a new Android Device.

While details are scarce we can speculate what might be coming from the invitation graphic. The Stock ticker background could mean that this may be a business-focused device with many multimedia options. Because it’s unknown what the new device is, there is still a possibility that it may be the official unveiling of the US version of the Samsung Galaxy Tab that will hit carriers later that week.

Hopefully this is a completely new device, comments suggest that it may even be the unveil of the Samsung MB2 media player that we started to hear about earlier this year. This will be samsung even further into competition with Apple with it’s own cell phone, tablet, and media player. We’ll be there with live updates November 8th, so stay tuned!