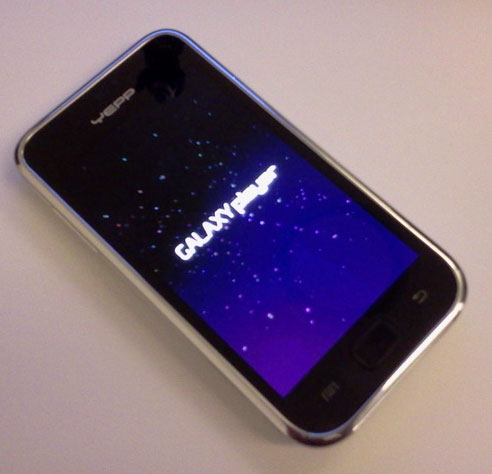 The Personal Media Player from Samsung, better known as the YP-MB2, still exists. It’s not just some cruel joke that Samsung is playing on all of us. And just to make sure that we all know that, it’s lined itself up for some more photos. It’s still looking just as good as ever, especially with that 4-inch Super AMOLED display. We’re beyond excited for the iPod Touch competitor, and we wish we were one of the lucky individuals overseas that reportedly has the device in hand.

As we just mentioned, the YP-MB2, or perhaps we should just start calling it the Galaxy Player (as that’s what the screen says), is positioned to be a direct competitor to Apple’s legendary Personal Media Player. But, as you might have guessed, the Samsung version will be running Android (probably 2.1, but hopefully 2.2 by the time it launches internationally). Furthermore, it will have two cameras (one on the back, one on the front), feature the same 4-inch Super AMOLED display that all the Galaxy S devices have, and it will also boast that 1GHz Hummingbird processor under the hood.

There’s still no word on an official release date, but if the rumors are true that people out there in the wild are using one, then the release can’t be too far away. We’re hoping for an announcement in September, so stay tuned.