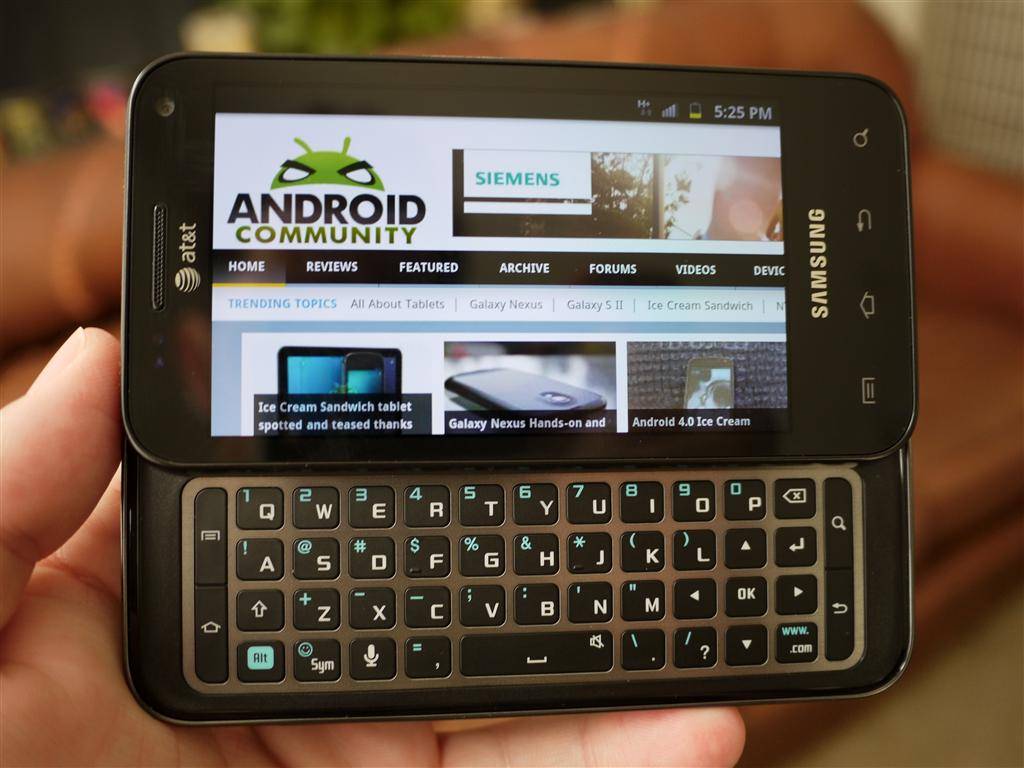 It seems that lately Samsung has been trying to cover all levels of the smartphone market, and with most carriers too. With the Samsung Captivate Glide they’ve done just that over on AT&T. Along with the Doubletime and a few other phones they have the entire range covered. Today we’ll be showing you the mid to higher end of that spectrum with the Captivate Glide and its slide-out QWERTY keyboard and dual-core processor. It might not be the biggest or the best but it will put up a good fight, that is for sure.

I’ll mention a little about the hardware to start and then direct your attention to my quick hands-on and unboxing video. I’ve also compared it to the other big dog on campus regarding dual-core sliders in the myTouch 4G Slide from T-Mobile. The AT&T Samsung Captivate Glide features a 4.0″ Super AMOLED display at 800 x 480, Android 2.3.5 Gingerbread and a pair of quality cameras. We also have the NVIDIA Tegra 2 dual-core processor at 1.0 GHz, 1GB of RAM and 4GB of internal storage. Yup, only 4 GB and around 1.89GB is usable but we do have a micro-SD slot for additional storage options. For now here is the unboxing video:

Hardware
Like mentioned above we have a brilliant and bright 4″ Super AMOLED display and it looks great as usual. Unlike most dual-core Sammy phones we are running on the NVIDIA Tegra 2 processor here and performance is just fine. The Glide does feature an 8 megapixel camera on the rear with flash and 1.3 up front for video chat. It has a 4 row slide-out QWERTY keyboard that is well spaced, decent travel, and overall a very enjoyable typing experience. 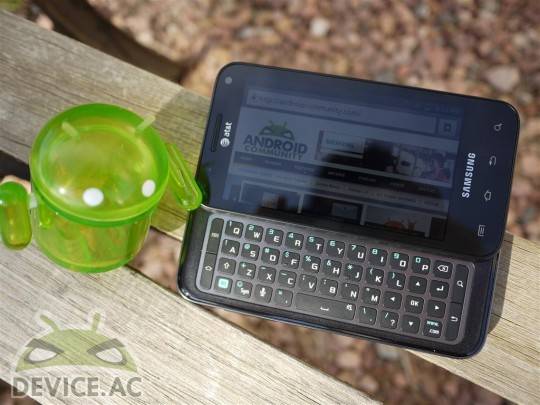 The Glide is a perfect blend of the original Captivate and the new Galaxy S II. Keeping the same screen size as the original while getting a bump in specs and a hardware keyboard for those in need. As usual we have the 3.5mm headphone jack up top as well as the micro-USB port for charging. I’d rather it be on bottom but that is just nit-picking. Power button is on the top right side just like all Samsung phones of the recent past with the lone volume rocker on the left bezel. Below is a small gallery around the phone. 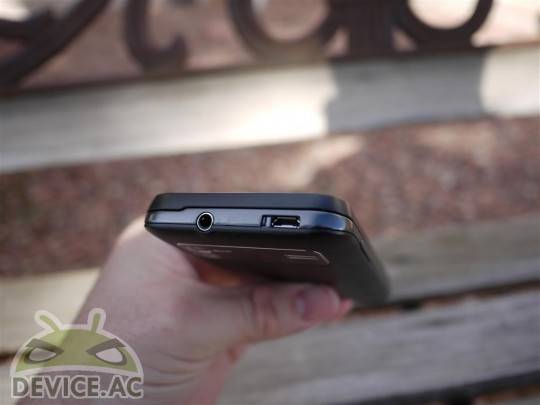 For being dual-core and having a full slide-out QWERTY keyboard Samsung has managed to keep the Glide quite thin. It’s not as fat as the myTouch4G Slide shown in the video above and its much lighter too. It does have the usual Samsung plastic and feels a bit cheap, even more so than some past Samsung phones. Most likely that is to help hit that awesome low price of just $149 with a new 2-year contract. Here’s another view to show you how thin it really is. 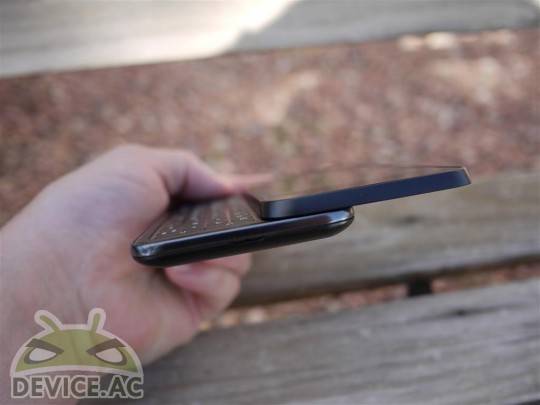 Software
Running on Android 2.3.5 Gingerbread with the latest Samsung TouchWiz UI performance is just as you’d expect from a Samsung device. The latest Touchwiz features like motion control and the improved camera interface are all welcomed changes and anyone stepping up from the Captivate or another Samsung Android device will be very pleased, and comfortable. The dual-core keeps performance speeding along and I’ve yet to experience any slowdown. AT&T and Samsung also have very little bloatware, something I’d glad to see. They’ve bundled Asphalt 6 racing for free — awesome! We have Amazon Kindle, Asphalt 6, ATT Navigator, Facebook, Qik, and Quick Office pre-installed as “bloatware” and that is all. I’ve seen way more in the past, so good job guys.

I wont talk about software much because we all know what to expect with Gingerbread. Whether this will get upgraded to Android 4.0 Ice Cream Sandwich remains to be seen, but it’s completely capable. For what it offers most users will be plenty happy here.

Performance
As usual I’ve ran a few benchmarks real quick just for a comparison. Most Galaxy S II’s score well over 3500 in Quadrant Advanced but they all have a slightly faster processor. We got around 3380 in Quad here, I never broke 3400 but considering the slower CPU these results were great and are about where I’d expect them to be for a Samsung device. Vellamo wasn’t as nice to the Glide, I’ll let you see for yourself below. 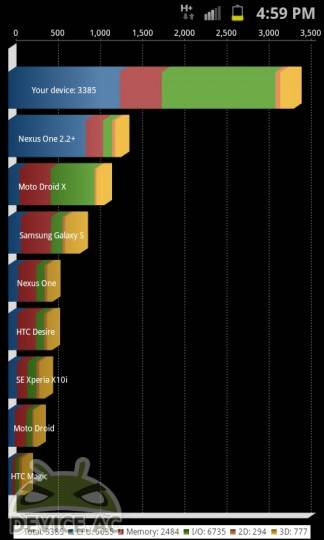 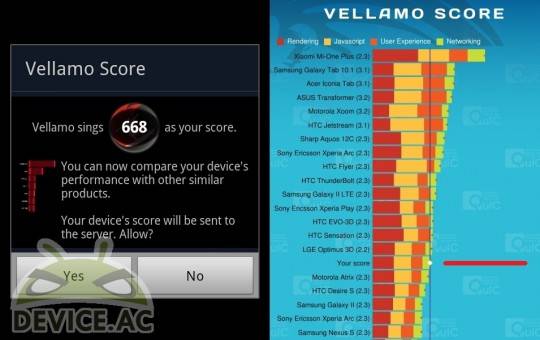 Battery Life & Camera
We do have a 1650 mAh battery included which is a nice size and the same many larger screen devices have. Running with a 4.0″ screen and that huge battery the Glide lasted me almost an entire day. I seem to be having a few problems where standby life wasn’t quite as good as I’ve seen from recent phones but I’ll keep testing that. The Captivate Glide should get all average users through an entire day with enough to spare.

Camera is 8 megapixels on the rear with flash and Samsung continues to offer some of the best cameras for Android, something Motorola needs a little help with. While it only records 720p and no 1080p it did an overall good job in that category too although a bit choppy compared to the Galaxy S II. Auto focus was fast and stable and I had no issues with bad or blurry results. Here are a few camera samples in case you’d like to see.

Wrap-Up
Overall I’m actually pretty pleased with the Captivate Glide for what it is. Not a top end flagship phone but definitely better than mid-range. It has a surprisingly decent feel that doesn’t seem too cheap and is as close as you can get to a Galaxy S II, without actually getting one. I keep sliding it partly open on accident trying to hit the power button but that is something users will get used to and wont be an issue. The screen may be smaller then some but the dual-core processor and QWERTY keyboard should make plenty of keyboard fans very happy. I’d say the Glide is one of, if not the best QWERTY slider Android handset available. 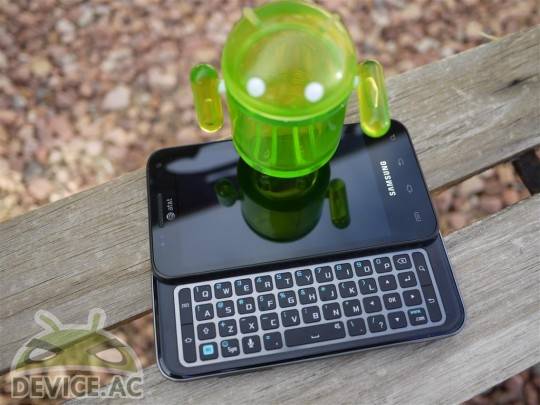 Again this is no Galaxy S II and the 4G is not LTE, only HSPA+ but that didn’t seem to slow things down here much. While some may opt for the bigger, better, faster Samsung Galaxy S II Skyrocket for those wanting a great phone at a great price that also has a keyboard the Captivate Glide is perfect. The Glide will be available November 20th starting at $149. Enjoy all the photos in the full size gallery below.