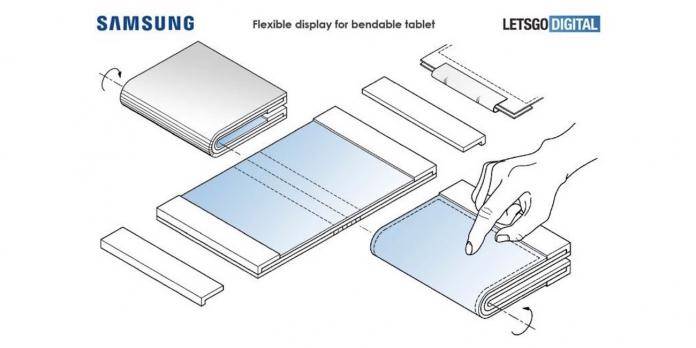 A Samsung bendable tablet will be coming soon. We don’t have the exact date and availability and details are scarce but at least we know it will become a reality. We have no doubts now because the Galaxy X foldable phone is almost ready. We’re assuming the two will utilize the same technology. If not, maybe something close or similar. Imagine a foldable Galaxy Tab. Based on the illustration above, the tablet will have a flexible display. The bendable tablet may be a first so let’s wait and see.

You see, the Galaxy foldable phone was also once regarded as a flexible and pocketable tablet. We don’t think we’re talking about the same thing as the latest Samsung devices–the phone and the tablet–are two different products.

The patent was filed at the USPTO last April but it was only published last October 11, 2018. In Korea, the original patent was already filed way earlier–about a year ago.

The flexible Samsung Android tablet bends inwards. You can use the bigger screen or the smaller display depending on what you need to do.

The user interface of the tablet automatically makes the adjustment so it will depend on the features you want. We’re hoping to see more leaks and hear new rumors about the bendable Samsung Galaxy tablet.