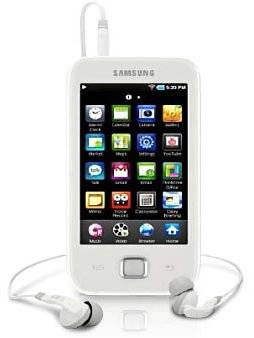 The French online retailer Material.net has begun taking pre-orders for a new Android-powered Samsung PMP. The media player will be as like based off the Galaxy S series of devices, think iPod Touch compared to the iPhone, but with Samsung’s hardware.

Named the Samsung Galaxy Player 50, the device offers up a 3.2-inch 400×240 pixel display, 2-megapixel camera on the back, WiFI, Bluetooth, and GPS. We may expect for this to become a worldwide device with the possibility of this being the focus on the Samsung Event in the US on November 8th.

This marks Samsung’s venture even further into Apple territory (and market share). First with it’s incredible set of Galaxy S phones, then with the yet to be released Galaxy Tab, and now a PMP Samsung is giving everyone some more options especially us Android fans.

Check out the video of the device in action: