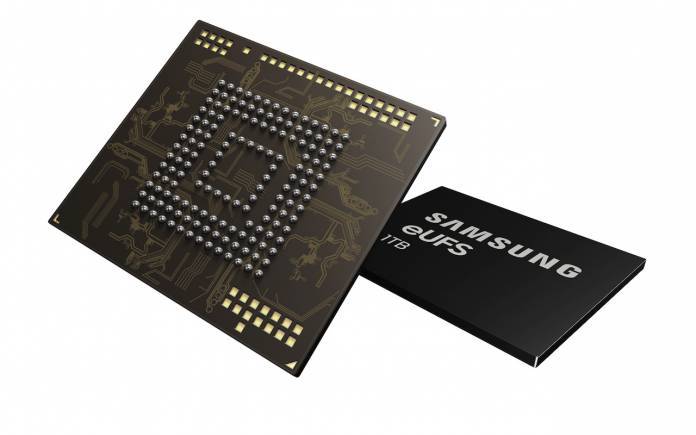 It’s amazing how memory and storage technologies have improved in the past decade. Aside from the mobile business, Samsung is also known for its storage products. The last related news we featured was last October when we said the South Korean tech giant would release UFS 3.0 storage. The year 2019 has started for Samsung with numerous leaks and rumors about the Galaxy S10 series but today, we’re confirming the availability of a 1TB UFS. This is just an embedded Universal Flash Storage 2.1 (UFS 2.1) and not yet 3.0.

The Samsung 1TB eUFS is a long way from the 128GB eUFS that rolled out four years ago. We know a few devices that have 512GB internal flash storage but 1TB is just so extra.

This new eUFS storage capacity can make a smartphone more powerful than any notebook that has smaller storage. With 1TB, you may no longer need an extra memory card because that is a lot of space already.

To make the Samsung 1TB eUFS solution possible, Samsung combined 16 stacked layers of the 512-gigabit (Gb) V-NAND flash memory and a proprietary controller. To give you an idea, the 1TB is large enough to save 260 10-minute videos in 4K UHD resolution.

Data transfer will be possible with improved speed. It’s like using a 2.5-inch SATA solid state drive (SSD) but this time, it’s in your smartphone. You can transfer a 5GB full HD video within five seconds. That’s really impressive so imagine the many possibilities you can do with a device that is equipped with this Samsung 1TB eUFS.