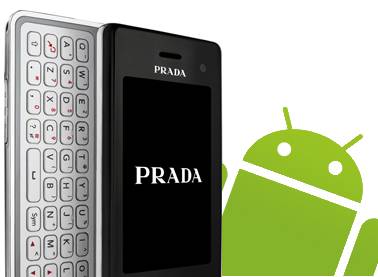 Most of you already know that LG has recently jumped into the Android bandwagon with the LG GW620 or Eve, which is their first smartphone running on Google’s free mobile OS. Now, according to the latest rumors in the blogosphere, LG might use Android OS in their top of the line phone; the PRADA.

Many people believe this is one more rumor before the world’s largest consumer technology tradeshow (CES) arrives. There are also rumors saying LG will be releasing a WiMAX ready device with Sprint, using the Android OS. Other rumors say the new LG phone will be running Windows Mobile. Heck! Apparently, nobody knows for sure.

Will LG bring to CES 2010 a PRADA 3 with 4G WiMAX? And if so, will it be a SIM-free and unlocked phone, or will it be a CDMA phone? Well, have the salt ready just in case. The truth is, LG have scheduled a joint event with Sprint and apparently, Brooke Shields will be there too.