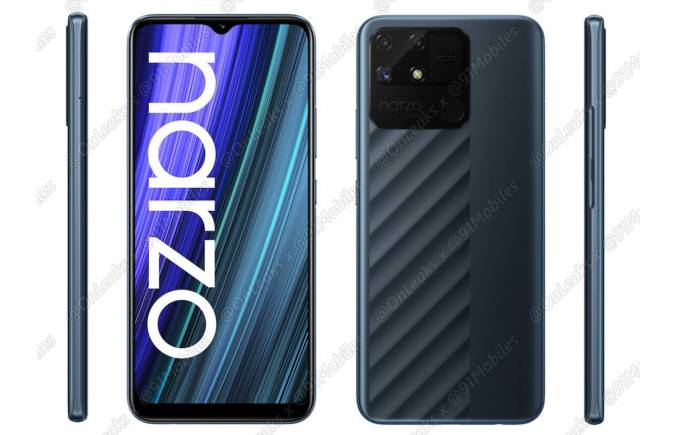 Realme is really getting busy. After the Realme MagDart technology, MagDart Wallet, and other accessories were introduced, we can expect a new smartphone from the company. It’s aside from the Realme Flash that was recently shown off as the first Android phone with magnetic wireless charging. It’s not the Realme GT Master Edition, at least, not yet–just this Realme Narzo 50A. It’s not official but image renders have surfaced online courtesy of 91Mobiles. Our source said the new Realme smartphone will be released in India with a dual-tone design and a triple rear camera system.

The Realme Narzo 50A has recently received its BIS certification. It boasts a waterdrop display and a large camera module. Based on the images, we see a nice dual-tone finish, a 3.5mm headphone jack, and a USB Type-C port for charging.

Realme Narzo 50A, as imagined by Steve Hemmerstoffer (@OnLeaks), basically as a very big camera system. The dual tone design sets it apart from other similar smartphones. The camera module features three cameras including 13MP. The fingerprint sensor is also placed inside the square module.

There is a speaker grill at the bottom. The volume control and power button are on the right edge. The main display is flat. The 8MP selfie camera is positioned in the center under a waterdrop notch.

As a follow-up to the Realme Narzo 20 and Narzo 30A, the Realme Narzo 50A will soon come with better specs– perhaps a bigger display than 6.5-inches and a newer one than the MediaTek Helio G85. Expect 18W fast charging support with the 6000mAh battery.