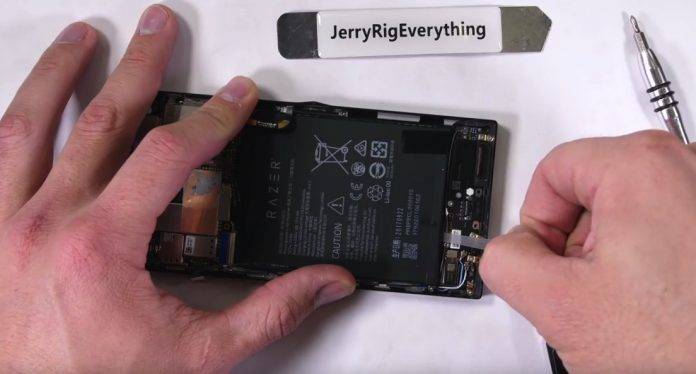 After durability tests, teardowns are usually expected especially if a phone survives and shows toughness. After stressing out the Razer Phone in a series of Scratch, Burn, and Bend tests, it goes under the scrutiny of Zach Nelson who is always interested in the innards of new smartphones. Scratching the display and back panel, burning the screen for a few seconds, and bending the phone don’t damage the device. Let’s see how Razer made it happen by checking out how the components are placed inside.

This teardown video reveals how it’s not easy to repair the phone as shown by the not-so-easy opening. This means repair and replacement will be difficult in the future that you’d rather just get a new phone. You can say the phone is intact that’s why it can stand the test of time but taking it apart can be a challenge.

The display is not glued but screwed. There are ten screws securing the display but you still need to heat the speaker grille area.

More screws are shown inside. Some parts can be removed easily but they are not easy to put back. What’s discovered to be more interesting is the large heat pipe which is too big for the small vibration motor.

The Razer Phone is an ultimate gaming phone so we’re expecting the specs are planned for gaming. Honestly, it’s quite unorganized inside but we know people won’t care much as long as it’s powerful.