Today Qualcomm has announced a new naming scheme for the Snapdragon platform. They are moving to a simple and easy to understand outline for the naming of current and upcoming products to keep everything easier to understand. They also showed a few specs of what we can expect to see in the future and things sure are looking good, can you say quad-core!

No longer will processors be broke down with confusing naming schemes like MSM8x55, instead it will be simply broke down into system categories such as System 1, System 2, etc. Much like Intel does with i3, i5, i7 Qualcomm Snapdragon chipsets will now be known the same way. Recent devices like the EVO 3D and Sensation 4G with their dual-core processors are in the S3 category and lower end phones will be either S1 or S2. 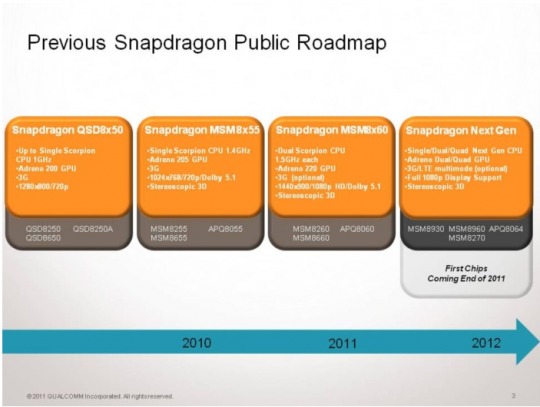 Above you can see the old roadmap and branding system how it has been thus far. This will be changing to the system detailed above and here is another photo (below) showing an example of how the new branding scheme and future roadmaps will look. 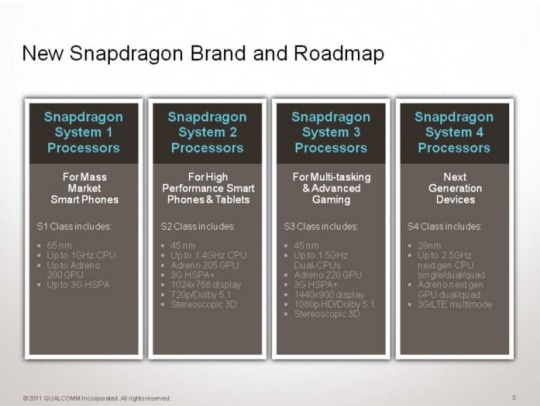 Interesting note is the S3 category shows 1.5 Ghz devices with the new Adreno 220 GPU as well as upgraded resolution offerings that reach well above current phone and tablet resolutions. This set of specs lines up exactly with the recently seen HTC Vigor that should have a dual-core 1.5 Ghz CPU and a high-res 720p HD display. You can throw that beast into the S3 category and expect more to follow. This new branding scheme will make things easier to understand, easier to follow, and easier to categorize moving forward. Here is an example of current devices on the market in the new branding method. 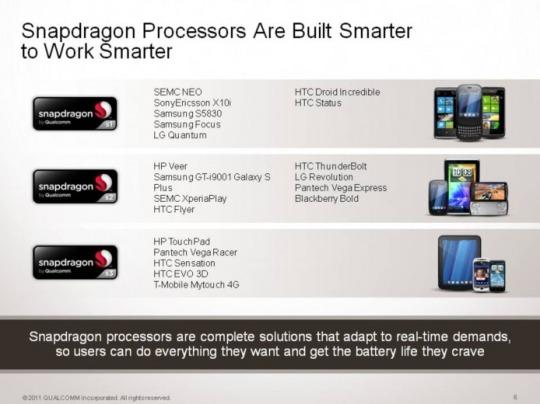 I am excited about S4 which Qualcomm has stated we will start to see arrive in consumer devices starting next year but no other time frame was given. Qualcomm system 4 (S4) series will bring quad-core devices with dual-core GPU’s on a smaller, more efficient platform and that is just one of many exciting things coming from Qualcomm in the near future.

I can’t wait to see what else Qualcomm has in store for the S3 level as well as the rest of 2011 as we make our way into the Holiday season and quad-core devices. Things are really going to get interesting when our phones have PS3 power inside come early next year.