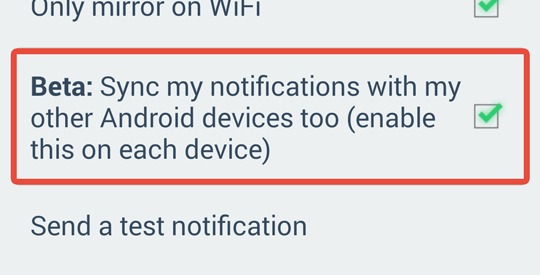 Just a month or so after its last update, PushBullet is pushing yet another one that brings a much need feature, or fix if you with to call it that. It has upgraded its Notification Mirroring feature so that notifications you dismiss on one device will now also be dismissed on other connected devices, whether it be an Android or a regular computer.

Notification Mirroring is actually a feature that has been there for quite a while now, since January to be exact. This allowed users to see notifications coming into their Android device right on their desktop or laptop, via a Chrome extension. While users can’t really interact with the notification other than dismiss it, it still allows them to quickly take a glance at the notification to determine whether it needs immediate attention or not.

This update takes that feature to a new level. Whereas before, the syncing happened only between an Android device and a computer, now Notification Mirroring will sync across all devices tied under the same account. In practice, this means that notifications on one smartphone will appear on the PC or laptop, tablet, or another smartphone. It also means that once you’ve dismissed a notification on any of those devices, they will also be dismissed on all the rest. The video below demonstrates the feature in action.

This new feature is currently still in beta, and it is clearly marked so when you try to activate it via Pushbullet’s settings. This checkbox must be set on each and every Android device where you want the feature to take effect. It also only works on devices running Android 4.3 and higher.