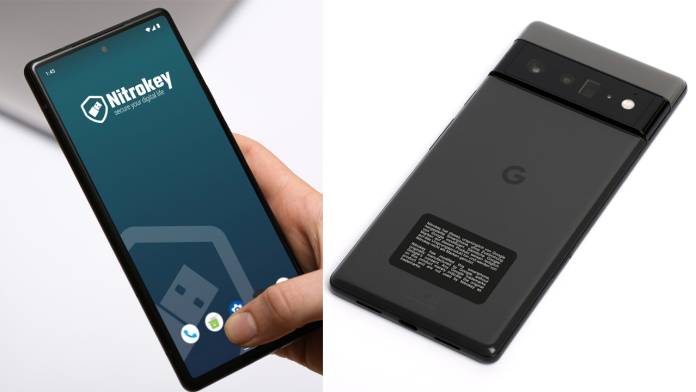 In September 2021, German company NitroKey took the smartphone world by surprise when it launched the “most secure Android smartphone.” Four months after the NitroPhone 1, the safest Android phone, the brand, that puts user security at the pinnacle of innovation, has launched the NitroPhone 2 and NitroPhone 2 Pro that are based on the Google Pixel 6 and the Pixel 6 Pro respectively.

To specialize on privacy and security, NitroKey’s new smartphones run GrapheneOS, which is a security-focused mobile OS designed for professionals. The security-oriented GrapheneOS can be loaded on the Pixel 6 series if you want, but the NitroPhone 2 and 2 Pro mean more to user privacy than the OS alone.

The NitroKey phones can prevent eavesdropping by allowing the user to remove microphones, cameras, and sensors as a precautionary measure. NitroPhone 2 and NitroPhone 2 Pro are based on the Pixel 6 series phones to take advantage of the Titan M2 security chip in the latter that allows secure boot and longer security update timeline.

Interestingly, the GrapheneOS comes without the Google apps pre-installed, but they can be added later to make the most of the ecosystem. The NitroPhone 2 and NitroPhone 2 Pro automatically turn off after a period of inactivity on the devices, which furthers the security prowess.