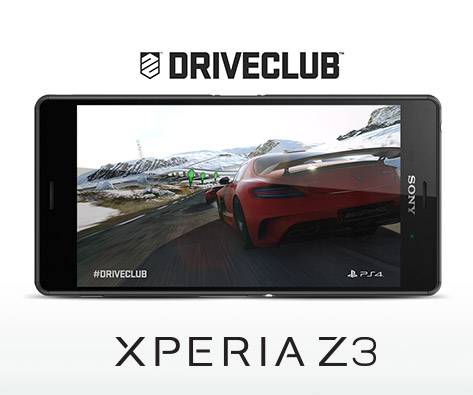 As if the Sony Xperia Z3 itself wasn’t already an incentive enough for you, Sony is offering a free digital copy of the racing game Driveclub for PS4 when you purchase their latest flagship device. The game, which has garnered mostly positive reviews since it was released last year, will be given as a bonus if you buy the smartphone within a certain period. The Xperia Z3 will be pre-selling from October 14-28 before it becomes officially available through T-Mobile by October 29.

The mechanics are simple enough. When you purchase your Xperia Z3 during the pre-selling phase, you can redeem your digital copy of Driveclub once you receive your unit. Go to the Sony Mobile site, enter the information asked, upload pictures of your sales receipt as well as the device’s IMEI number which can be found on the box itself. They will then email you a promo code so you will be able to claim the game. But you need to redeem it by November 14 and you will receive the promo code not later than November 21.

The Xperia Z3 has revived interest in Sony as a contender in the Android market. Its 5.2-inch full HD screen has been enhanced with the Bravia and Triluminos tech. It also boasts as the furst smartphone (so far) that has ISO 12800 sensitivity which means you can use it in low-light or underwater situations. The 20.7 megapixel camera also has a 25mm wide angle Sony G Lens which mobile photography enthusiasts will find very handy. It can also be used with the PS4 as it has the Remote Play feature, which is probably why they’re giving you a Driveclub game so you can try it out.

T-Mobile will start selling the Xperia Z3 by October 29, offering it at $630 for the full retail price. You can also get it at $26.25 per month for 2 years with zero down if you’re a T-Mobile subscriber. Those who pre-order the smartphone will get their device before the actual release.