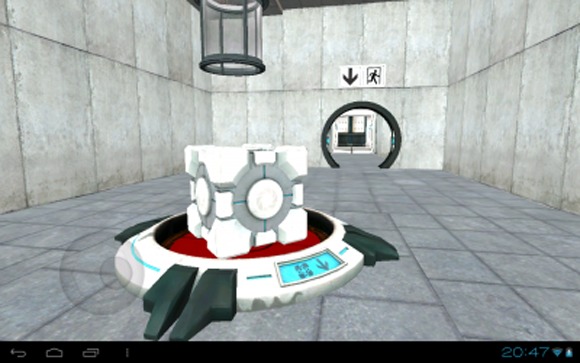 Oh man this news is just awesome. One of my favorite PC games of all times has been unofficially ported to Android. Portal, the popular shooter/puzzle game by Valve has been tweaked and ported with the Unity engine to run on our Android tablets and so far it looks amazing. While graphics are obviously missing and it can be a little glitchy at times this is a very early beta look at the game and we can expect huge improvements to follow.

The cake is a lie! Or according to these developers the cake is not a lie and indeed we will get a surprise in the form of this brain-twisting game on Android. If you’ve never played Portal the above saying wont make any sense, but trust me it should. The video below only shows one of many levels that will soon be coming. For now this is clearly a work in progress but I can’t wait to see what else they have in store.

The Unity engine is what makes this possible and the folks developing this awesome port will update accordingly. For now those looking to get into the action and run some aperture science tests on their Android phone or tablet can do so if they please. You can find a pre-developed and highly unstable APK of the game from this forum post. If you are feeling brave give it a try but you should probably wait for a better, more stable version to be released.

The chance that I can almost fully play Portal on my Android tablet is mind blowing. I sure hope Valve is reading this and plan to bring some games like this to Android in the near future. Portal isn’t the only one and an unofficial version of Counter-strike has also seen a port for Android. If you do give this a try sound off in the comments and let us know how it goes.