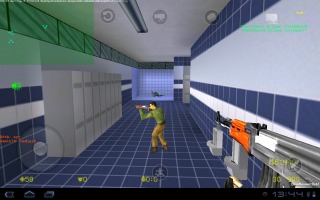 A lot of you reading this have spent entirely too much time playing Counter-Strike, in its various computer and console iterations. That’s not OK. When you’re online, you should be spending your time reading the stories on your favorite Android blog (this one) and keeping hard-working bloggers under a roof. But if you wish to extend your infamy by wasting time in entirely the wrong digital avenue, you can now do it in the total absence of roofs, thanks to some even harder-working developers over at XDA. They’ve released an Android version of the perennial tactical shooter, and it’s already surprisingly complete.

If you are somehow ignorant of Counter-Strike, it’s one of the most popular first-person shooter games in the world. Based on the engine in the original Half-Life PC game, it first appeared as a free download way back in 1999. The game is deceptively simple: join either the counter-terrorist or terrorist squad, equip your soldier, then fight it out in deathmatch or other modes. Players that perform well and/or survive to the next round keep their equipment and get more cash for upgrades. Players that die… don’t. Thanks to its accurate weapon portrayals, speed and immense player community, Counter-Strike has remained incredibly popular even as more modern games have outpaced it in graphics.

The Android version is a modification based on Counter-Strike 1.6 and running on the Unity 3D game engine. Two download versions exist at present: version 5o for Android 2.0+ ARM 6 devices, and 6i for phones and tablets with ARM 7 processors running Android 2.3 or above. According to the developers, there are more than 600 players online at the moment. Naturally the game is still in the beta phase, but the developers are welcoming bug reports and other feedback.