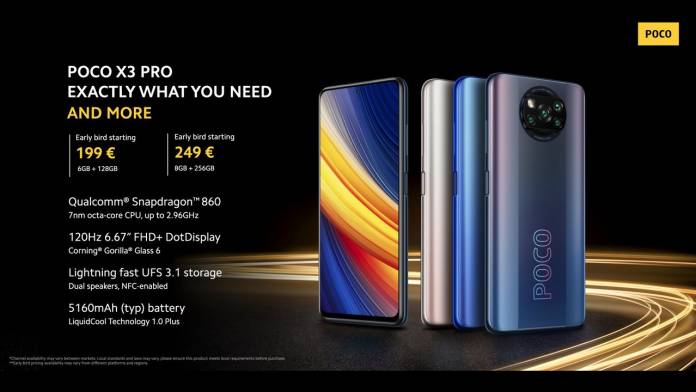 POCO X3 Pro was on the cards and it has now been officially announced with some understated, some exciting features. A mixed bag of features and specs, the X3 Pro, powered by Snapdragon 860 processor, has debuted alongside POCO F3 – a 5G capable flagship-level handset powered by Snapdragon 870 SoC. Similar to its predecessor X3, the POCO X3 Pro feature X-style camera module and has an interesting display that gives the Samsung Galaxy A52 a run for its money.

On the front, the 6.67-inch Full HD, LCD display with punch-hole camera touts 120Hz screen refresh rate and a 240Hz touch sampling rate for smooth performance. For optics on the front, the POCO X3 Pro gets a 20MP selfie camera with f/2.2. On the back in a recognizable X formation is a quad camera setup tuned to a better software experience, despite compromising on the megapixel ground. The array is spearheaded by only a 48MP primary camera with ½-inch sensor and f/1.8. Along with this there is an 8MP ultra-wide camera, a 2MP macro and a similar depth sensor.

The biggest differentiator is the processor. The guts of the X3 Pro is powered by Snapdragon 860 4G chipset, which comprises the same octa-core CPU and GPU as that of the 7nm Snapdragon 855+. Juicing up the new POCO phone is a 5,160mAh battery that supports 33W fast charging, capable of charging the phone full in a minute under an hour.

For connectivity, the X3 Pro has Wi-Fi, Bluetooth 5.0 and a 3.5mm headphone jack. It also features LiquidCool Technology 1.0 Plus for heat dissipation. For the convenience, the phone comes with dual speakers and has a side mounted fingerprint sensor. POCO X3 Pro runs MIUI 12 based on Android 11 and it comes for a starting price of €249 ($300), which gives you 6GB of RAM and 128GB UFS 3.1 storage. The higher-end 8GB + 256GB model will retail for €299 ($350). The phone arrives in Forest Blue, Metal Bronze and Phantom Black colors. 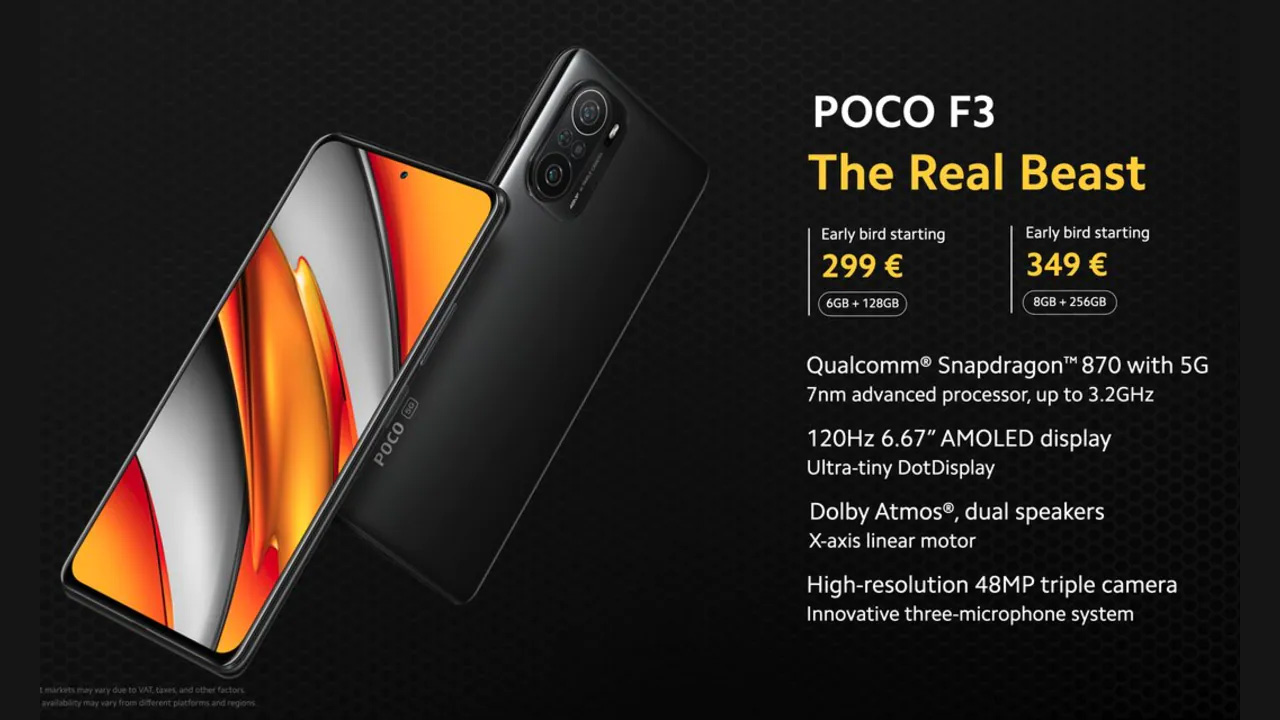 Most apparently a rebranded Redmi K40 flagship launched in China, the F3 is the latest treat for the POCO F series fans. The phone rolls out with a 6.67-inch Full HD+ AMOLED display with 120Hz refresh rate. Making the display even more potent are 360Hz touch sampling rate, HDR10+ support, and 20-megapixel selfie camera.

For optics, the POCO F3 features a triple camera module comprising 48-megapixel primary camera, boasting Sony IMX582 sensor and aperture of f/1.79, 8MP ultra-wide-angle lens, and 5MP telemacro camera. The camera array has a dedicated microphone for capturing crisp audio. Running Android 11-based MIUI 12, the phone is powered by Snapdragon 870 chipset that comes paired with 6GB or 8GB of RAM and up to 256GB UFS 3.1 storage.

The POCO F3 features a slightly smaller 4,520mAh battery but does support 33W fast charging that takes 52 minutes to charge the battery full. The phone doesn’t have a 3.5mm jack but supports Wi-Fi 6, Bluetooth 5.1 and USB-C. The phone rolls out in Night Black, Arctic White and Deep Ocean Blue colors for starting price of €349 ($400).