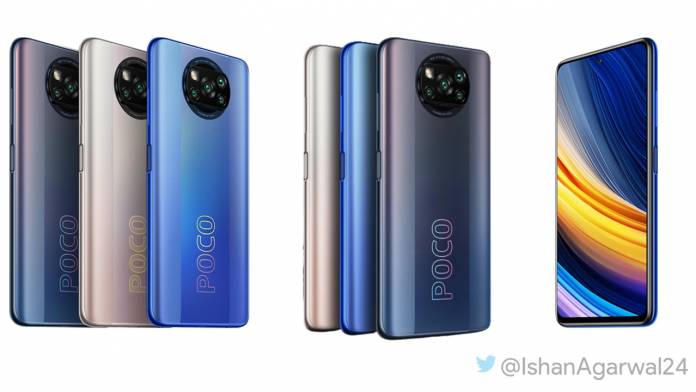 POCO is expected to host two launch events in the coming days. A global event is scheduled for March 22, while an exclusive Indian launch event is likely to happen on March 30. The latter is slated to reveal the POCO X3 successor, POCO X3 Pro, renders of which have just been released. While some of the specs and features of the upcoming phone have been in the rumors, this is the first time we have some sort of a picture of what the X3 Pro is likely to look like.

The render images have been leaked on Twitter by Ishan Agarwal, who states that the POCO X3 Pro will come in in Phantom Black, Metal Bronze, and Frost Blue color variants. The phone, as it appears in the images, will have a centrally placed punch-hole camera – identical to the POCO X3 launched in India in September last year.

On the flip side, the smartphone reveals a dual-tone body with a circular camera array place in the top center. The camera module is led by a 48MP primary sensor, which if true, would be a downgrade from the 64MP camera on the POCO X3.

It is also revealed through the visible side-mounted fingerprint sensor that the POCO X3 Pro will not upgrade to an AMOLED screen. It would instead come with an LCD panel that is tipped to feature 120Hz screen refresh rate.

From what is available through the previous rumors about the phone, POCO X3 Pro will be powered by unannounced Snapdragon 860 SoC. The smartphone is likely to support wired fast charging and feature a decent 5,200mAh battery. POCO has not made anything official about the X3 Pro, so we would have to wait another two odd weeks to know the real deal.