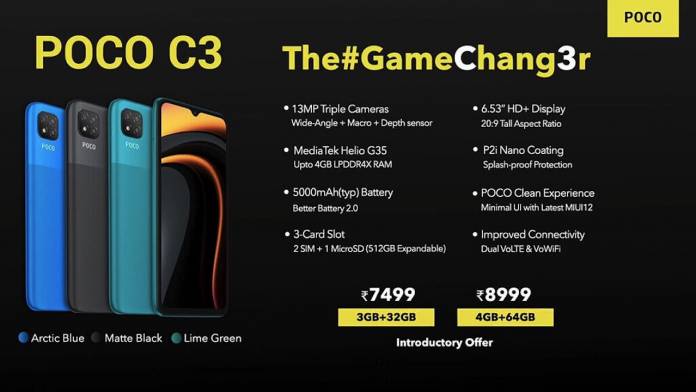 A month ago, Poco announced the POCO X3 NFC. It was after a series of leaks and teasers. The gaming smartphone arrived with a Snapdragon 732G chipset from Qualcomm and a 5160mAh battery. This week, the brand surprised us by launching another one–the POCO C3. This new phone launched in India with a large 5000mAh battery, triple rear cameras, and MediaTek Helio G35 processor. Mainly, this is a rebranded Redmi 9C from Xiaomi with some changes for the Indian market.

The POCO C3 has many similarities with the Redmi 9C but the Poco team tweaked the back panel with a two-tone design. It also boasts an anti-fingerprint texture for an enhanced grip. The rear fingerprint rear on the Redmi 9C is missing on the POCO C3. POCO made sure the phone is water-resistant by using P2i Nano water-resistant coating and rubberized seals.

Like the Redmi, this one is powered by an octa-core Helio G35 processor by MediaTek, 680MHz IMG PowerVR GE8320 GPU, and 4GB of LPDDR4x RAM. There is a large 6.53-inch HD+ LCD screen with 1600 x 720 pixel resolution. The selfie camera is placed under a waterdrop-style notch.

The built-in memory is 64GB which is expandable up to 512GB with a microSD card slot. You can see a triple-slot SIM card tray. This one still supports the very basic 3.5mm headphones plus data syncing and micro USB port for charging.

The 5000mAh battery is optimized by Better Battery 2.0. It is a special software that looks into your battery use. The phone uses MIUI 12 for an enhanced mobile experience. Expect the usual Android features like app drawer, dark mode, icon personalization, Google Discover Feed support, and quick search categories.

When it comes to imaging, there is a triple rear camera system that is comprised of a 13MP main camera, 2MP depth camera, and a 2MP macro shooter. The front-facing camera is 5 megapixels.