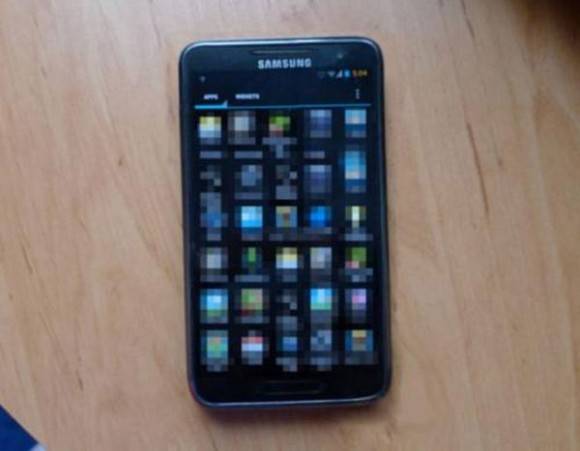 I’d like to say right away that we’re reporting this one primarily for entertainment value. As seems to happen more days than not, yet another photo claiming to be the oh-so-elusive Samsung Galaxy S III has appeared on the Internet, this time courtesy of Polish website OPDA. That’s what it claims to be, but what it looks like is a Galaxy Note with some custom software and a little Photoshop trickery. Inspect the appropriately low-res photo below to decide for yourself.

A few things to take notice of: the hardware looks pretty identical to the Samsung Galaxy Note, except for the elongated Home button below the screen. Instead of the oblong shape that Samsung’s been using for the last couple of years it’s long and thin, not unlike a stretched out version of the same button on the HP TouchPad. To be frank, this doesn’t seem like a likely design choice on Samsung’s part – it would be trickier to hit that button with your thumb, and the extra width serves no purpose.

The interface displayed on the portion of the screen that isn’t obscured looks like Ice Cream Sandwich. This is certainly possible – there’s leaked ROMs out there and custom ones to boot, after all. But there’s no reason to block out the app icons… unless this isn’t ICS, and is perhaps just one of the look-alike launchers available on the Google Play store, which won’t change the look of individual icons. The battery and signal area doesn’t match the standard Samsung style, either.

Yup, what we’re looking at here is almost certainly one more in a long line of fakes. The relatively low resolution of the posted photo helps hide the little inconsistencies from prying eyes. As Android fans we’d be flattered if it weren’t so annoying – the Galaxy S III is reaching iPhone levels of hype, rumor and misinformation. For something that’s actually promising, check out the OLED Association’s leak of the Galaxy S III’s screen size and type.