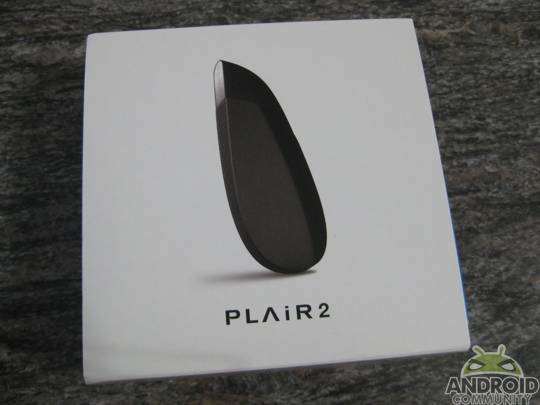 The PLAiR 2 streaming dongle was announced earlier in the month. This, as the two in the name would imply, means this is a second-generation device. If we were to sum this up simply, we would say the PLAiR 2 has been given additional features and a price cut. But while that statement is true, we cannot help but compare the PLAiR 2 to the Chromecast, as opposed to the original model PLAiR.

Not only is there some similarity in the packaging, but the device also looks rather similar to the Chromecast. They are not the same color, but they are both small dongle devices that plug into your television using an HDMI connection. They both also require a power cable plugged into the wall and depending on where the HDMI port is located on your TV, you may need an small extension cable. Thankfully everything needed to get up an running with the PLAiR 2 is included in the box. That said, we have unboxed the PLAiR 2, set it up and have been playing around, so read on to see how the PLAiR stands up based on our usage. 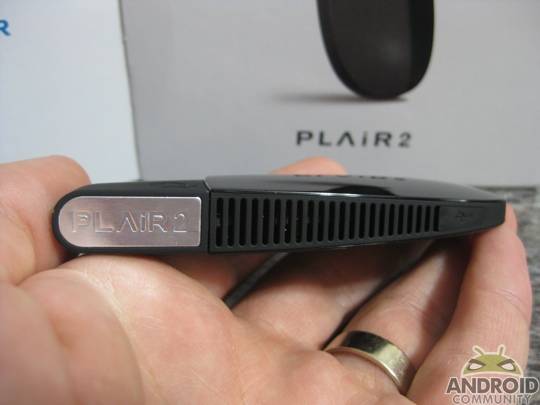 To begin with, the set-up process is fairly simple. The inside of the packaging has all the necessary steps. You start off by plugging the PLAiR into the TV and the wall. After that point you adjust the television to the correct input source, download the Android app and connect the device to your home network. The three image gallery sitting below should give a good idea of all the included parts you will be connecting.

Once things are all setup, this is where it gets a bit more interesting. Not to mention, where the similarities to the Chromecast stop. First though, a bit more about the mobile app. Launching the app allows access to the remote, channels, playlists (dubbed Plairlists), starred stations and featured sections. These are all pretty much as one would suspect given the names and basically just make things easy to find and navigate.

While those sections were nice to have, we found we spent most of the time using the remote portion. Launching the app brings the mention to “tap to pop out remote” and just as it says, a tap offers what you see below. The initial screen is shown on the left and the one on the right is what things look like with the keyboard popped up (we use the latest SwiftKey if you happen to have been wondering). The top portion acts as a touchpad, which will be used for onscreen navigation and below that you have your swipes and then the back button, keyboard, home, volume up/down and mute options. 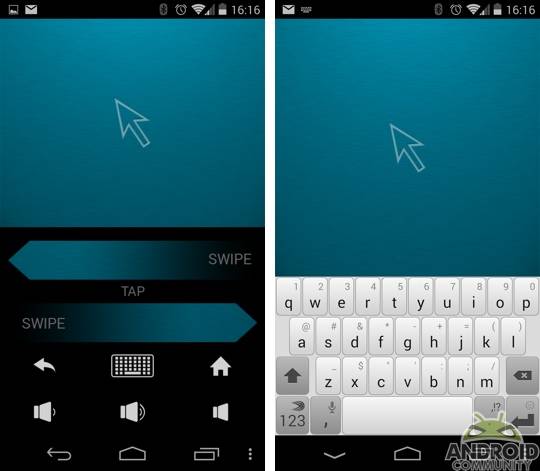 Now that you have a basic idea of the app and the setup process, we can get into the actual use. PLAiR allows for audio and video and also has support for (many, but not all) Android apps. Unlike the Chromecast, PLAiR is not quite as limited in terms of what can be viewed. The big difference between this and the Chromecast — with PLAiR you are launching the remote app on your phone and then controlling the dongle itself. As opposed to launching the Netflix (or Hulu Plus) app and sending the stream to Chromecast.

On the television, PLAiR launches to a screen with some app icons. These icons scroll right to left (or can be set in grid mode) and as many would expect, a click of the icon will launch the app. That is where the touchpad area of the remote app comes in to play. You have the basics such as Netflix and Hulu Plus, and you can also stream image slideshows using apps such as Flickr. 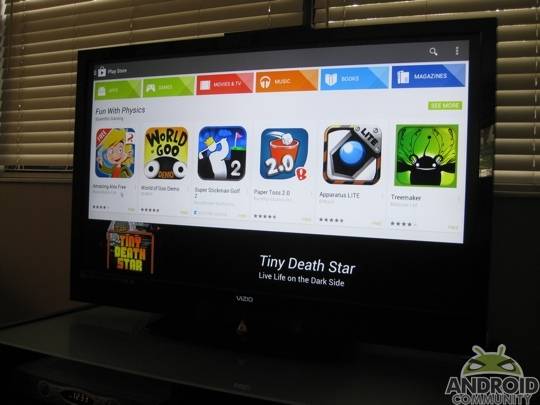 PLAiR comes pre-installed with apps to include the ones mentioned above, as well as CNN, Pandora, Crackle, NHL Game Center, Xfinity and a few others. While the pre-installed apps were a nice draw, the potential here comes in with the Play Store access. We were able to download and play games that we have purchased for other Android devices, including Angry Birds Star Wars II. The Play Store is just like what you see on an other Android device, though some apps will give a non-supported message.

We did spend some time with the Angry Birds, however we were not as fortunate when we tried to play Dead Trigger 2. Of course, we aren’t sure how well we could have controlled that with the basic controllers found in the app anyway. Similarly, we were unable to download and install the Plex app. Bottom line here, the stand-out feature of the PLAiR 2 is the Play Store access, but it is not perfect.

But while it may not be as perfect or wide open as you would find on your smartphone or tablet, it does mean the PLAiR has the potential for more available content as compared to similar devices. The PLAiR 2 is currently priced at $49.99, which puts it just a little above the Chromecast. About $15 higher, but you do get quite a bit more in terms of app support. And even if you cannot actually use each and every Android app, you should be able to find enough to justify the difference in price.

Overall we liked the PLAiR, the setup was easy and the actual day to day use was simple. But that is not to say the experience was perfect. We did have a few issues aside from not being able to download some apps. There were times when certain apps (such as the Play Store) became unresponsive. We also had to unplug (to reboot) the PLAiR on occasion. And otherwise, navigation was a bit hit or miss and did take some time getting used to in the beginning. Still, we like the idea of PLAiR and we like the potential, even if the experience was not perfect just yet.