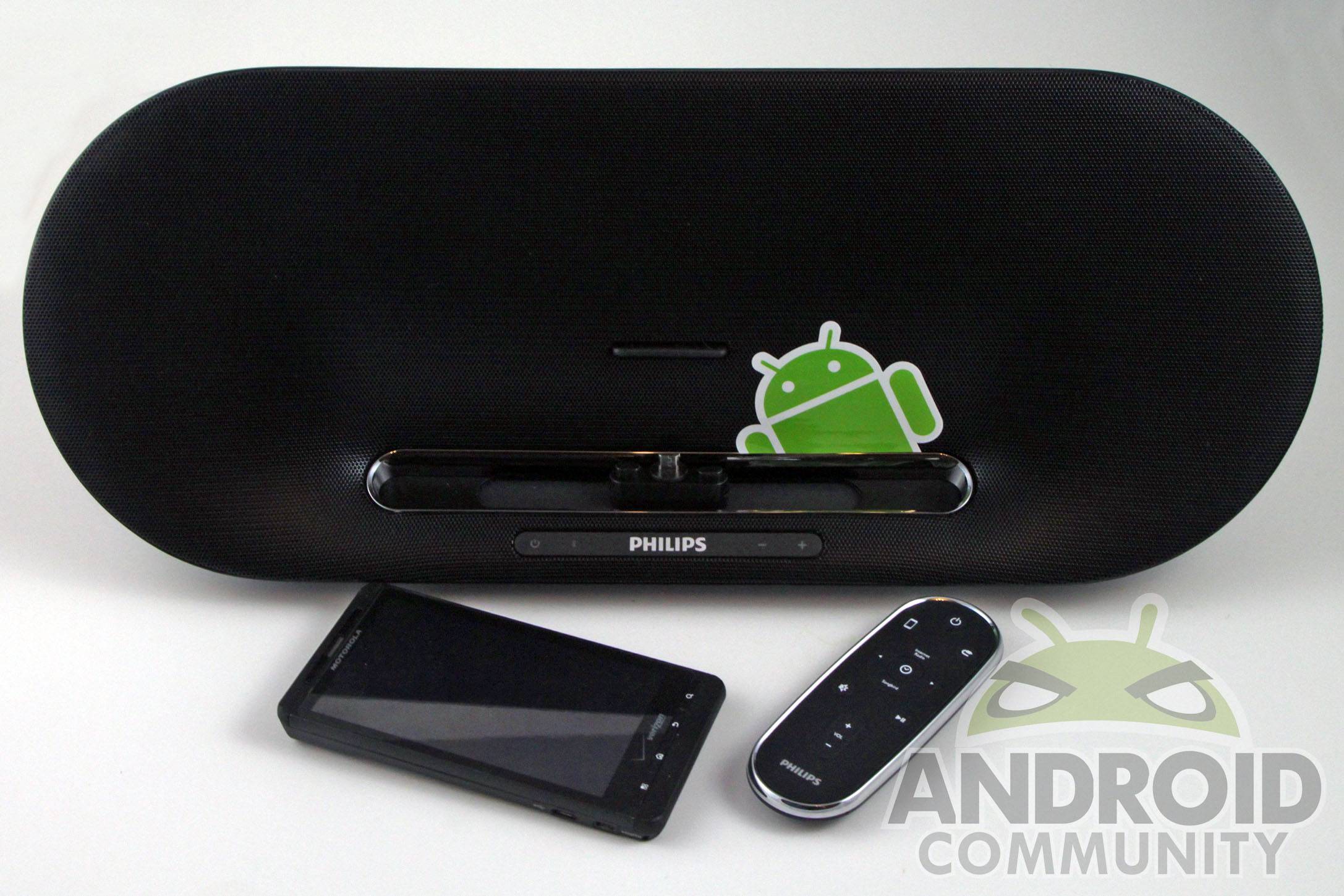 Android users have a virtually unlimited choice when it comes to smartphone hardware, and it’s one of the most important advantages of the platform. Unfortunately a wide variety of hardware inexorably means a smaller selection of accessories, especially ones that work with all models. Nowhere is this more evident than in the dock/speaker department. Whereas you can’t find a $20 alarm clock without an iPod dock, models that support Android are few and far between. Philips seems to be the only company that’s interested in this particular segment, and for that, we’re eternally grateful. They sent us the top-of-the-line Fidelio AS851 speaker dock, designed specifically to work with Android smartphones, for review.

The AS851 is the largest of the Fidelio docks, and at about a foot and a half wide by eight inches tall and deep, it’s quite sizable for a speaker dock. The front is dominated by a huge speaker grille hiding stereo speakers, with the microUSB dock itself and some minimal controls at the bottom. Power and volume are all you get – a play/pause and track skipping buttons would have been nice. The build quality is pretty good, with no loose seams or creaking. The Fidelio dock is pretty hefty, but not so heavy as to be unwieldy for its size. Around the curved back you get the AC input, a USB port for charging devices that won’t fit on the dock itself, and a headphone port for directly connecting  devices without Bluetooth. Also included in the box are a male-to-male audio cable and a small remote.

The most important part of the dock is the flexible USB port on the front. It slides from left to right and rotates 180 degrees to accommodate any size smartphone, and a tiny wheel on the side can lock it into position. While the plug itself is fine for even the largest smartphone, tablets are just too heavy, and in any case usually won’t charge via a MicroUSB port. The dock is definitely designed with smartphones, and not much else, in mind. Android phones with a microUSB port on the bottom will stand up in portrait mode, while those with a port on the side (like the DROID X in the photos) must stay in landscape mode. 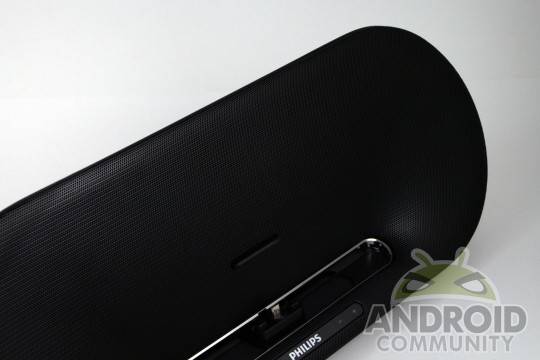 Since Android can’t play music directly via USB, the Fidelio docks use an A2DP stereo Bluetooth radio to play music. Pairing was not a problem among any of the Android devices I had on hand, and considering that that includes phones from Samsung, HTC and Motorola, not to mention one Huawei and one HP tablet, that’s a very good thing. Once connected the audio from the phone broadcasts clearly through the speakers, whether on not it’s actually plugged in to the dock. This means you can walk around with your phone, up to about 30 feet or so, while still having audio play through the dock. 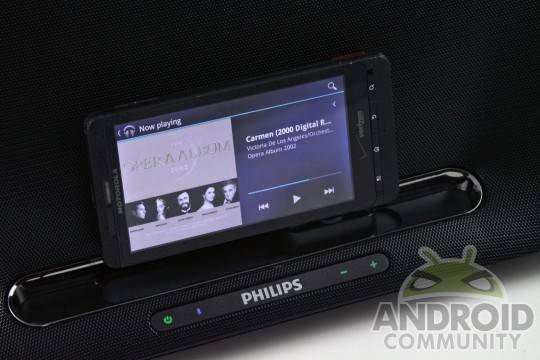 Once connected, the phone will easily reconnect time and time again. The Bluetooth connection didn’t show any of the skipping or fuzziness that’s all too common with car stereos that use A2DP. The threshold for audio seems a bit low, though – if you manually lower the volume on your phone (not the dock) to less than 30%, no sound at all will come from the dock. Note that because of the Bluetooth connection, the Fidelio dock should work with any phone, tablet or MP3 player that uses Bluetooth – iOS, Windows Phone 7, even some feature phones. Failing that you can use the line-in for some old-fashioned tunes. It’s a surprisingly versatile device.

The Fidelio dock is LOUD. As in, hear it from every room in your house (or the apartment complex) loud. Sitting it next to my desktop computer it gave my JBL 2.1 speakers a run for their money. However, the sound that comes from the Fidelio is not exactly hi-fi. You can get lots of volume, yes, but the audio seems tinny at the high end and lacks bass. This is probably due to the A2DP Bluetooth connection, which is fickle enough to allow for some hiss and cracking on even the highest-quality music. This is a common problem with Bluetooth speakers, and one you’re likely to encounter with any similar hardware. Of course, you could physically connect your phone via the line-in port, but that kind of defeats the purpose of the dock. 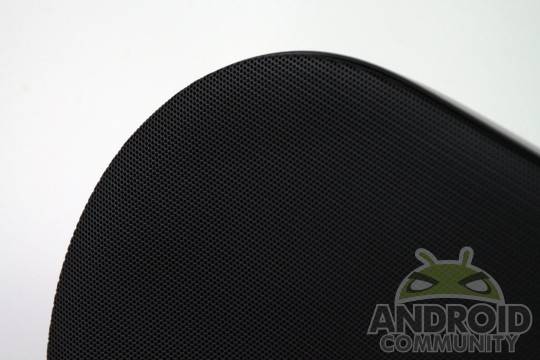 Philips has conscientiously developed an Android app for use with its Fidelio docks, and you can download it directly from the Android Market. The most important inclusion in the software is the ability to manually adjust the dock’s equalizer, which is otherwise impossible. It will also automatically connect to the dock when inserted… or, in fact, plugged in to any power source. Unfortunately, a host of bugs made force-closes a constant problem. The dock app itself is nothing to write home about, and I found myself switching back to my own homescreen more often than not. But for the equalizer feature, it’s a worthy (and free) download. Most of the functions you can handle with the dock’s physical remote.

The Fidelio dock is a nice piece of audio equipment, even if it is unfortunately brought low by the limitations of Bluetooth. As an Android speaker dock it’s at the head of a very small pack. You should have no problem connecting any Android phone, and if a tablet is more your style, you can still use it without physically connecting to the dock. 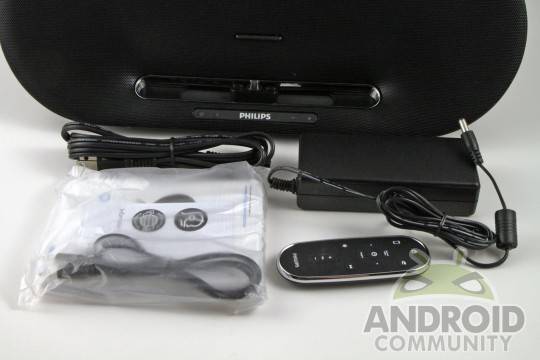 For $200 it isn’t cheap, but the high-end build quality certainly justifies the cost. If you find yourself listening to music or podcasts with cheap-o headphones, especially in your own home, it may certainly be worth it. If you like the idea of an Android speaker dock but don’t want to drop two Benjamins, Philips has smaller docks in the same family starting at just $90, suitable for a nightstand or desktop.

Check out our hands-on video below: