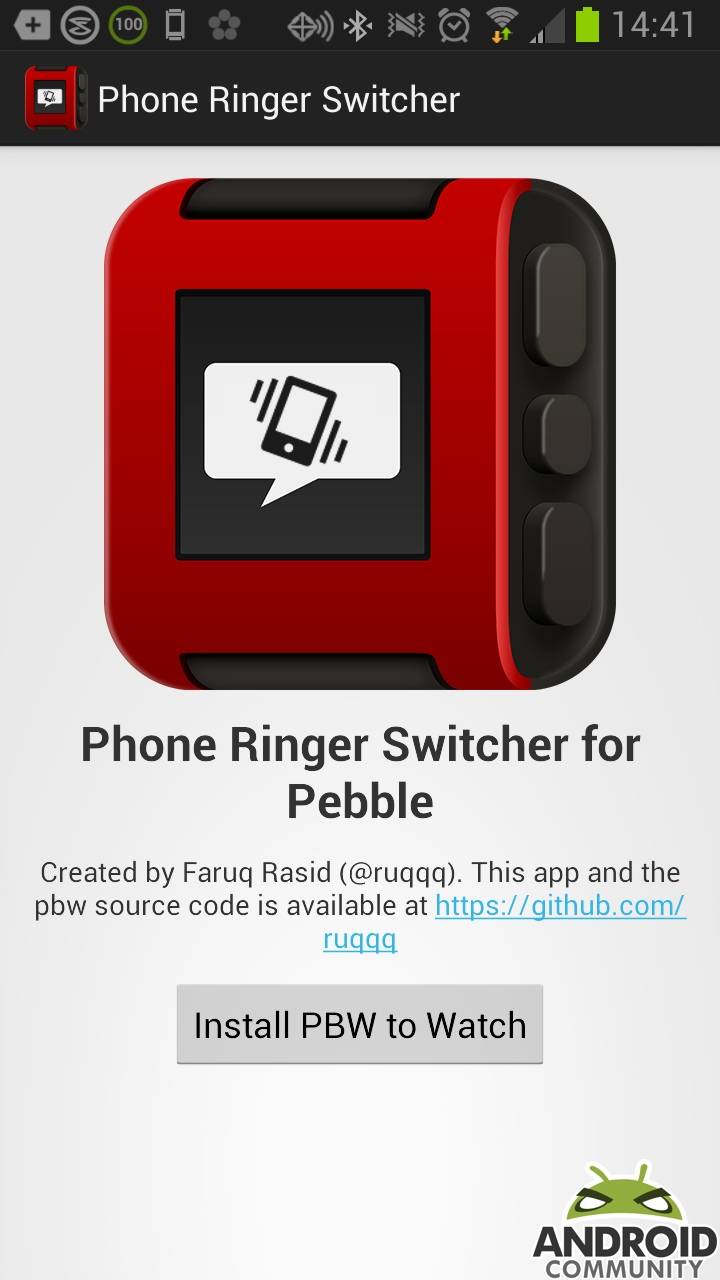 Pebble rolled-out an updated SDK earlier in the month. Specifically, that update was for the Pebble Kit which added support for two-way app communication. Or more to the point, this update will allow developers to create apps that run on your Pebble and control your smartphone, which we have just gotten a look at with a newly launched app. That app is called Pebble Phone Ringer Switcher and it is available for Android users.

The app is available for free and has support for devices running Android 2.3.3 or later. Those using the app will need to also have the official Pebble app installed on their device. That brings us to the first point here, the Pebble Phone Ringer Switcher will tie-in with the official app. You will first need to install the app on your device. Once installed you launch the app and click the “Install PBW to Watch” button.

From here you will see a Pebble is Updating message which is followed by an Update Complete message. This is where the tie-in with the official Pebble app comes into play. Once you see those messages and hit the back button (in the upper left), you are taken to the Installed Watch Apps section of the official Pebble app. The ringer app, assuming it installed properly, should be listed at the bottom of the installed list as “Phone Ringer.”

Otherwise, the app does just what is should — allows the user to switch their phone from sound to vibrate to silent. Once installed on your Pebble you access the app (from the main clock) by tapping the center button on the right side of the Pebble. From here you scroll down to the Phone Ringer app and once again tap that same center button. Once at this point you simply tap the button next to which option you want with the top being sound, the middle being vibrate and the bottom being silent.

Bottom line here, the app is simple and to the point. Perhaps more important though, it works as one would expect and adds one extra bit of functionality to your Pebble. As for us, we tested this on a Verizon branded Galaxy S III and had no problems getting it installed, or having it adjust the settings. Of course, seeing this just leaves us wanting more. The one issue we see possibly coming though, with more apps coming to the Pebble, we are probably going to want some way to adjust the order the apps are listed to allow for quicker access to those that are used more often.